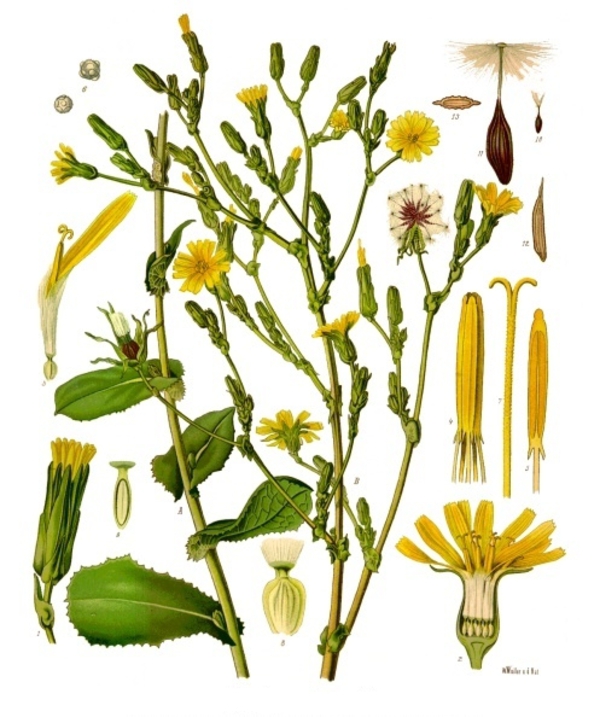 When you got the pains, you might want to give wild lettuce a try. A classic European pain killer, wild lettuce was used in everything from headache to the tenderness that followed being hit by a horse cart. But, we are dealing with a pain killer and not much more.

Accidents do happen and no medicine cabinet would be complete without a pain killer of some sort. For the moments when someone burns a finger, slams a hand in the car door, or whatever else that sends shooting pain through the body, wild lettuce will ease the pain until the body can heal itself.

Our next plant has a rather telling common name, opium lettuce. What more does a person need to know. When it comes to pain wild lettuce will take care of the situation. It is native to central and southern Europe and ranges from there all the way to the northern tip of asia . Like many of the weeds that follow man around it now can be founding growing just about where ever the colonials touched ground. The part used in medicine is the leaves which are gathered in june or july, or before the plant shoots to seed.

Wild lettuce is indeed the wild forbearer of the item we chop and dice into salad bowels around the world. Though currently excepted as a safe food stuff this was not always the case. Prior to the victorian age wild lettuce was well known as a pain killer and sedative. When cultivated varieties appeared in the market, varieties devoid of the medicinal elements found in the wild lettuce, social commentators were not pleased and became quite vocal as to the incredible danger this represented to society. It would be like if someone introduced a salad variety of marijuana. When lettuce came out as a garnish there was great concern it would cause childlessness, or would produce children with a subnormal intelligence. A whole list of horrible things were supposed to happen if people proceeded with this shameless eating of lettuce. (Ironically, most of which have occurred, but probably not do to lettuce eating). The public needn’t have worried as they did, if you taste wild lettuce and then garden lettuce you can taste the difference immediately. You wouldn’t choose to sit down to a salad made of wild lettuce, unless eating matches represents a good time to your taste buds. The lettuce scandal along with wild lettuces pain killing abilities have long passed.

Along these lines, John Uri LLoyd, one of the most famous Eclectics the world ever knew, said this of Wild lettuce. In case you are doubting the lettuce story this quote should take any question out of your mind, ” The fact that lettuce eaten frequently induces drowsiness was known in ancient times, and its reputation in this direction lead Dr.Coxe of Philadelphia to suggest the collecting of the juice, after the manner employed in the making of opium. His experiments were published in 1799 under the title”lettuce opium”. Since that date others writing on the subject created quite a demand for the lactucarium produced. It will be seen that the introduction came through the usual empirical channels.” People really did boycott lettuce due to its stupefying reputation.

The scientific name for wild lettuce, lactuca viridis, relates to part of the plants physiology. If you scrape the leaf or stem of the plant it ejects a milky white latex immediately. The name lactuca comes from the latin word for milk, as in lactation. At various times in history the plant was purposefully wounded and the milk collected, dried, and moulded into balls. These balls were known as lactucarium, the substance was collected much like opium and was used just like it. The drug was called lettuce opium and was widely used.

Just about as old as opium as a pain killer, the Roman emperor Augustus fell quite ill and was treated with wild lettuce. He survived his run in with the grim reaper and had a temple and a statue erected in the plants honor. Sadly, the statue does not survive, in fact I cant think of a single statue celebrating the virtues of any vegetable. Clearly we are speaking about a different space in time.

Later on the time line Gerard said this of it,” it procures sleep, asswages paine, moves the courses in women,and is drunke against the stingings of scorpions and bitings of spiders. The seed taken in drinke, like as the garden lettuce, hindreth generation of seed and venereous imaginations.” Wild lettuce is a sedative and as such it should come as no surprise that when people drink the tea they dont have much sexual desire. Gerards statement to this effect represents what was commonly held at the time he was writing. The Victorian age followed this time and the notion carried over. Remember the Victorians said eating lettuce would cause childlessness.

The milky substance ejected by the plant has been found to contain lactucic acid, lactucopicrin,lactucin a sesquiterpene lactone, flavanoids based on quercetin, coumarins cichoriin and aesculin, n-methyl-b-phenethylamine , and up to 60% latex, which is the raw ingredient in rubber. This rubber potential contained in wild lettuce has resulted in its use experiments looking for an alternative source of rubber. At various times the world has experienced a rubber shortage, as in the second world war, and other options were reviewed. It would take a lot of lettuce to make a tire and the baby industry never got off the ground.

Where as wild lettuce bombed out in the rubber business it has been substantially more successful in the medicinal arena. Grieve said this of the drug in 1931, ” The drug resembles a feeble opium with out its tendency to upset the digestive system. It is used to a small extent as a sedative and narcotic.” One little know fact about heroin use is that when the drug is first taken it causes vomiting. This is perhaps the bodies way of “saying, wrong thing to do.” Even the opium derivatives tend to upset the stomach, something our friend wild lettuce would never do.

In a catalogue of medicinal plants for sale by the Servall Company published in 1917 the company offered the following information on wild lettuce, one of the botanical drugs they delt in. ” Highly esteemed to quiet coughing and allay nervous irritation,a good safe remedy to produce sleep, to be used when opium and other narcotics are objectionable.” This blurb was written at a time when you could still get opium and cocaine over the counter, doctors had yet to gain control of the prescription pad. For many reasons narcotics are objectionable when you are dealing with a case of pain, not least of which is they are highly addictive.

Much like passion vine, Wild lettuce is used to slow down the nervous system. As such it is very good in insomnia, nervousness, hysteria, muscle spasms, colic pains, painful menstruation, bothersome coughs,painful digestion as well as pain in general. Its primary use today is for pain as it is a little on the strong side. It goes without saying, caution should be used when using this drug. It would be embarrassing to be admitted to a drug rehab for an lettuce addiction.

Getting your herb:
1. Purchase dried leaves or tincture from your health food store/herb seller.
2.Grow it yourself! Wild lettuce is a weed plant and will happily colonize any corner of the garden you are willing to give it. You will be surprised how big the wild parent of garden lettuce is! The plants can be the size of a cabbage and the flower stalks can reach six feet with ease. The key to growing the plant is getting the seed and these can be had from a mail order house specializing in herb plants. Wild lettuce is planted just the same as garden lettuce and the then stand back as this plant really grows. You are best to plant it in the fall or at the earliest moment in the spring. A long about july the plant will rocket to bloom and you want to harvest you herb before this happens. As soon as you see the plant start raising in height in an attempt to bloom, its time for you and your butcher knife to move in for the kill. When the plants have reached about two feet in height cut them to the ground and bind the stalks with string so they can be hung in a dry location to dry. When fully dry separate the leaves from the stalks, save the stalks and dump the stems. Keep theme dry as the dried leaves are inclined to mould.