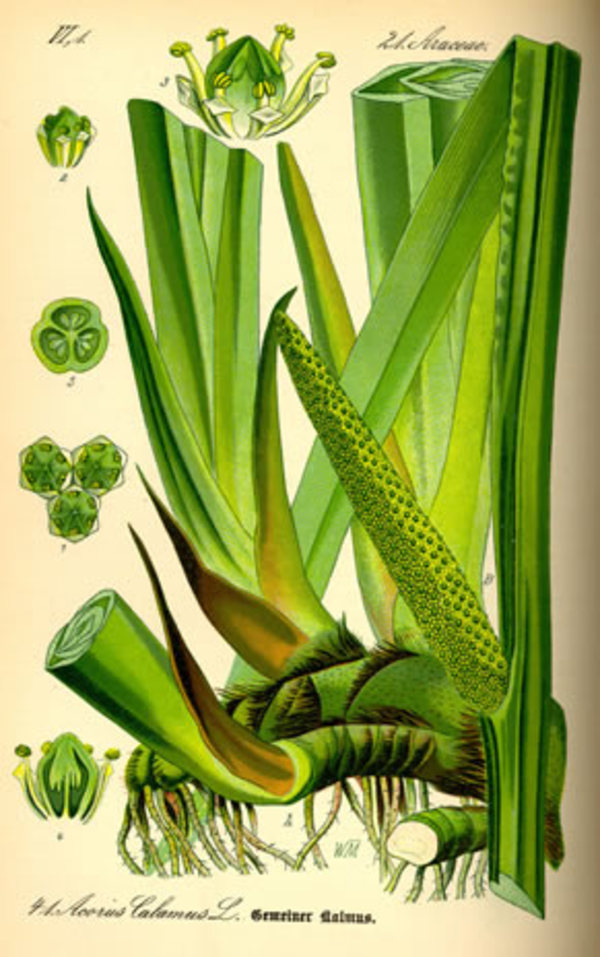 Sweet Flag is a wetland plant that is often described as a tonic. It has been used around the world to stimulate health, digestion, libido, and the skin. However, its primary use is to stimulate the digestive glands to produce the enzymes and acids neccessary for proper digestion. As people age, the digestive tract is less efficient and as such, older people experience a range of digestive complaints, from slow digestion to constipation. Sweet flag stimulates digestion and, this explains its inclusion in some of the more famous digestif’s…..liquers served after dinner to assure proper digestion.

However, its important to remember that it was also used to stimulate slow healing wounds towards healing and activate a dormant libido. It seems to activate the cells that it comes into contact with, be those in the digestive tract, the skin, or the sex bits, and, as such may have general life force stimulating capacity. The ethnobotanical trail suggests this is the case and its worth investigating for its effect on general health and more specifically in cases where people seem to be loosing theirs.

The generic name, Acorus, is from Acoron, the Greek name of the plant. Acoron is derived from Coreon, the Greek word for the pupil of the eye, as this was the plant the ancient doctors used to treat the eye. Its ancient use did not stop with the eye, but included a variety of compaints rooted in poor vitality. This was especially true when it came to poor libido.

It is said to clean the blood, lighten intestinal blocks, and fire up the sex bits. The plant is considered to be good for the whole body and finds its way into a number of tonic preparations. One listing states that the plant is good for a man when he, quote, looses control of the bladder, quote. The root is used on four continents to get the wild thing going, all four cultures can’t be off the mark. The fragrant root is used to flavor Benedictine and Chartreuse, two liqueurs of some note. As an aphrodisiac the rhizome is dug up, peeled and packed in sugar until it becomes candied. The sweetened rhizome is eaten as a before bed treat to get things going. The plant is considered aphrodisiac for both women and men. As a major ingredient in Chartreuse and Benedictine, one may sample its powers at any liquor store. The bitters of yesteryear were flavored with calamus, and some European bitters still contain the fire root, also available at some high end liquor stores. With its inclusion into these famous liqueurs, it rather makes you wonder about monks in monasteries brewing up these sexually inciting beverages. Perhaps there was more to monastic life then we are lead to believe.

1883: J.M.Scudder
Sialogogue: CALAMUS When masticated the root of the Sweet Flag acts as an excitant to the salivary organs. It may be used whenever a topical stimulant of this character is required, as in the rheumatic and paralytic affections about the mouth. The Calamus is occasionally substituted for tobacco, by those desirous of discontinuing the use of that nauseous agent.

1909: King’s Dispensatory
The root is carminative, slightly tonic, and excitant, and forms a useful adjunct to other tonics and stimulants. It may be used in cases of flatulent colic, atonic dyspepsia, feebleness of the digestive organs, and to aid the action of cinchina or quinine in intermittents. It forms a excellant substitute, in syrup, for Godfreys cordial. In flatulent colic of infants it is best combined with magnesia. Externally it is a valuable application to indolent ulcers, and to keep up the discharges from blistered surfaces and issues. Dose of the infusion made be scalding four drachms of the root, coarsely bruised in eight fluid ounces of water, from four to six fluid ounces, of the powdered root, twenty to forty grains, a tincture may be prepared fro one part of the root and five parts of alcohol. Dose, from five to thirty minims.

1909: Felter and Lloyd: CALAMUS (U.S.P.) – SWEET FLAG
Action, Medical Uses, and Dosage – The root is carminative, slightly tonic, and excitant, and forma a useful adjunct to other tonics and stimulants. It may be used in cases of flatulent colic, atonic dyspepsia, feebleness of the digestive organs, and to aid the action of cinchona or quinine in intermittents. It forms an excellent substitute, in syrup, for Godfrey’s cordial. In flatulent colic of infants it is best combined with magnesia. Externally, it is a valuable application to indolent ulcers, and to keep up the discharges from blistered surfaces and issues. Dose of the infusion made by scalding 4 drachms of the root, coarsely bruised, in 8 fluid ounces of water, from 4 to 5 fluid ounces; of the powdered root, 20 to 40 grains; a tincture may be prepared from 1 part of the root and 5 parts of alcohol. Dose, from 5 to 30 minims.