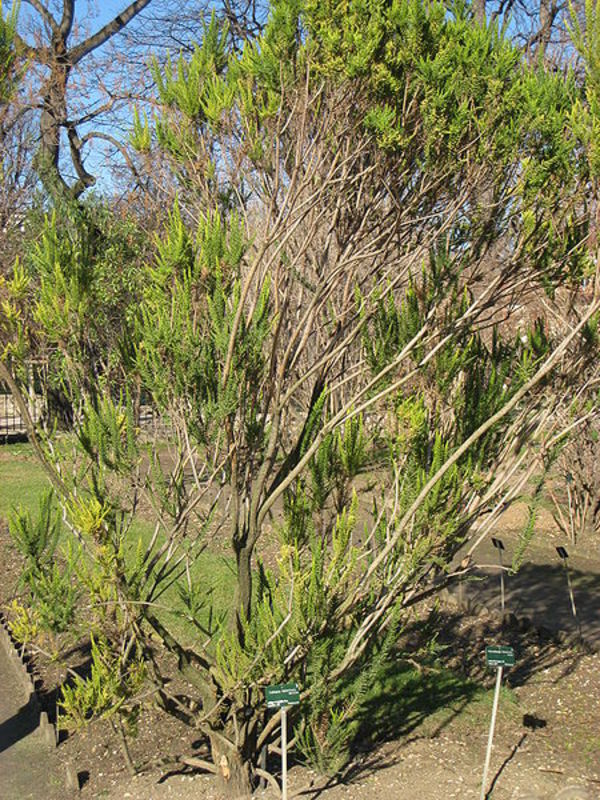 Indicated: In irritation and inflammation of the bladder, especially if due to mechanical causes, gravel, uric acid, phosphoric or calcareous deposits it is a good remedy. In vesical tenesmus, dysuria, it is almost a specific. In uric acid diathesis, lithaemea it stimulates the liver to action, greatly increases the action of the kidneys, reduces excess of uric acid permanently. May be thought of in cystitis, gonorrhoea, recent cases of simple renal hyperaemia. It acts as a gastric tonic, increases appetite, promotes digestion. It
should not be combined with salines. Dose fluid extract 10 to 30 minims taken in glycerine or mucilage as it will precipitate in water.

1909: Felter and Lloyd: FABIANA – FABIANA
History -This tree like shrub grows on the dry, sandy hill-tops of Chili. Though belonging to the solanaceous family, it has, when not in bloom, the general appearance of a conifer. The tender portions of the plant are covered with a peculiar, greenish-gray resin, unaffected by water, and affording protection tot he plant by preventing the too rapid evaporation of its moisture. The whole plant has a bluish-green aspect. Its Chilian name is Pichi. The drug imparts its virtues to alcohol, the tincture yielding a heavy precipitate when added to water. Pichi was introduced into American commerce by Parke, Davis & Co., of Detroit , Mich.

Action, Medical Uses, and Dosage – Pichi has not been extensively employed by Eclectic practitioners. It is reputed a diuretic, tonic, and hepatic stimulant. It favorably influences digestion, and the hepatic benefit derived from it is believed by many to be the indirect result of its effects upon stomach digestion. Dyspepsia an djaundice have been treated with it. As a diuretic, it acts similarly to the terebinthinates and balsams, an dlike them, is of no value in structural renal disease, but of benefit only in functional disorders, and particularly those of a catarrhal type. It has been successfully employed in cystic catarrh, both acute and chronic, and is said to be a popular remedy in Chili, for both hepatic and urinary calculi. Gonorrhoea, and prostatitis accompanying or following that complaint, are said to be benefited by it. Notwithstanding its irritant character (in large doses), and the view held that it is contraindicated in structural kidney disease, benefit has been claimed from its use as an antihemorrhagic in albuminuria when bleeding is associated with the latter disorder. An infusion (3i to water Oij), is given in wineglassful doses every 4 hours; dose of the fluid extract, 1/2 to 1 fluid drachm every 4 hours, in capsules or flavored emulsion. It precipitates in water unless the latter be alkalinized. In doses of from 5 to 20 drops Prof. Webster speaks well of the fluid extract to relieve urinary irritation, dysuria, vesical tenesmus, and dystitis. It is also recommended in nocturnal urinal incontinence, renal congestion (when no organic changes exist), and in alkalinized solution in the uric acid diathesis.