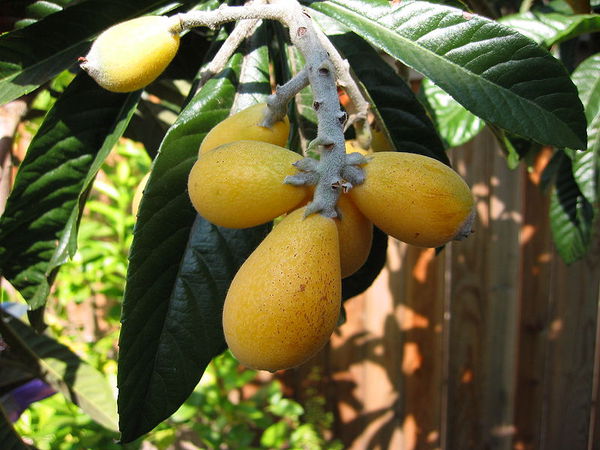 History and Traditional Uses of Biwa
Biwa is native to Japan and can be found growing wild in the mountains and fields of the countryside. However, today it is primarily cultivated, both for its fruits and leaves. It is an evergreen tree growing to heights of three meters or more with thick, hairy, spatulate leaf. It bears small white flowers in winter and light orange oval fruits in early summer. One theory holds that its name comes from the similarity between that the shape of fruits and the Biwa, a Japanese musical instrument. Either way, Biwa fruits are delicious and very popular.

When it comes to Japanese medicine and healing, it is the leaves of the plant that get called into service. The famous sixteenth century herbalist Richinjin mentions Biwa leaves in his classic book “Honzoukoumoku”. The herbalist recommends that the leaves for a host of conditions. His text states they are anti-emetic, relieve thirst, and treat lung diseases, skin diseases, poor stomach function, fever, heat stroke, and even beriberi. In Japan, the leaves have been used for these purposes and many more.

To begin with, Biwa leaves factor into a famous Japanese healing technique. The treatment is known as the Biwa Leaf Treatment. Rather than being used to combat one disease, it is used to treat all diseases.

In the treatment, the leaves are roasted, and pressed over the part of the body having a problem. After being allowed to rest over the troubled part, the leaves are massaged into the skin. The notion is that the active constituents of the roasted leaves soak into the body and then heal the organs and tissues. Folk practitioners say the active constituents cleanse the blood and thereby enhances the bodies self healing power. This treatment is said to treat any disease safely, even when the cause is not yet known. Wherever the leaf is applied, healing occurs!

In days gone by, a cooling beverage brewed of Biwa leaves was the favorite summer refreshment of Japanese commoners living in big cities. In Tokyo, street venders were heard proclaiming the cooling virtues of their Biwa beverage, promising it would help a person endure the heat. Not only was it thought to cool a person down, it was thought to prevent food poisoning. In the days before refrigeration, food poisoning was a problem in city centres in the summer months. The Biwa leaf beverage was said to help a person avoid coming down with potentially life threatening food poisoning and generally keep them well in hot times.

Most notably, Biwa leaves are a popular treatment for a collection of skin problems, used internally and applied externally. The leaves are made into a poultice or used as a bath herb to treat heat rash, eczema, dermatitis, psoriasis, acne, inflamed skin, and for general skin care. When the infusion is concentrated it is used to combat athletes’ foot. Though the water extracts of the leaves are popular for skin problems, the alcoholic extract is also popular. The alcoholic extract is an excellent first aid treatment, speeding healing and preventing infection. It is used to treat cuts, burns, insect bites Biwa leaf extracts can be found in lotions, hair tonics, and hand crème all due to its incredible skin healing qualities.

Chronic Inflammatory Skin Conditions
Contemporary research has shown the leaf of the Biwa plants contains a collection of active constituents which include tannins, saponins, amygdalin, polysacharides, and natural acids. These compounds are thought to be responsible for the actions noted for the leaves of the plant. Research has shown that it contains ursolic acid and maslinic acid both of which have been found to be anti-inflammatory.

A decoction of leaves of Eribotraya japonica was used for 167 cases of chronic bronchitis with short-term control in 42 cases and good improvement in another 60 cases. It was much more useful in stopping coughs than it was as an expectorant, and was not at all effective in stopping asthma. No side effects were reported.
Practitioner Recommended Uses of Biwa

Biwa leaves act as an efficient anti-inflammatory agent in chronic skin and respiratory disease. Chronic skin diseases marked by chronic inflammation, psoriasis and eczema being two notable examples, are quieted with the topical application and internal usage. For skin conditions it should be used topically and internally.

Chronic respiratory complaints like bronchitis are also helped with its regular internal usage. As the leaves are entirely non-toxic, this remedy is ideal for chronic conditions requiring regular use.