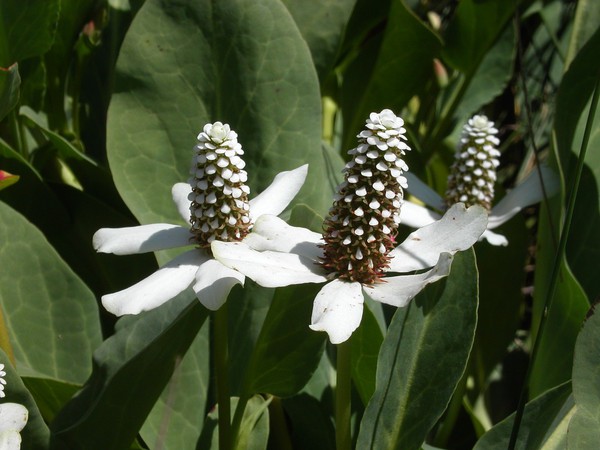 1909: Felter and Lloyd: ANEMOPSIS CALIFORNICA – YERBA MANSA
History and Description -The Inidans of Southern California, Mexico , and Arizona , according to Dr. Palmer (Amer. Jour. Pharm., Decl, 1878), employ both the roots and leaves of this plant. Dr. William H. George, of California , first brought the drug to our notice, the root being the part employed. When dried, the roots are of a brown color, wrinkled, from 1/4 inch to 1/2 inch in diameter, and seem to grow mostly horizontally near the surface of the ground. From 4 to 10 fleshy rootlets spring in a clump from one side of the root at the base of the leaves, and run downward. A strange peculiarity of the lot of roots examined by us, is, the presence of numerous grass stalks that pierce and grow through them, sometimes appearing several inches from the place of entrance.Internally, the root is pinkish; and, running lengthwise through it, about midway between the surface and the center, is a ring of course, fibrous, medullary matter. The upper portion of the root is not infrequently brown and half decayed.

Action, Medical Uses, and Dosage – This plant was introduced to the profession by Dr. W. H. George, of California . He states that the natives esteem it a paunacea far excelling the Yerba santa, and successfully employ it in all malarial fevers, in diarrhoea, and in dysentery (Eclectic Med. Jour., 1877, P. 238). In a letter to Prof. King, he observes that the natives frequently carry the root with them, chewing it and swallowing the juice, and consider it a certain remedy for cough and pulmonary affections. They likewise employ a strong infusion of it as an efficacious local application to saddle and collar galls on horses. Dr. George considers it a stimulant tonic, astringent, carminative, and anti-emetic. He has successfully employed it in gonorrhoea with profuse discharge, and think sit equal to cubebs in this disease, and more pleasant to take. Prof. King has tried it in one case of gonorrhoea, and in several cases of bronchial cough, with favorable results. The dose of the fluid extract is from 10 to 60 minims, in syrup, repeated every 3 or 4 hours.

This is highly valued by the native Indians of Southern California and Mexico . The California observers have used is extensively.

The dose of anemopsis specific medicine is from five to thirty drops. The root is the part used in medicine.

It is a tonic not only to the gastro-intestinal tract, but also to the respiratory and renal organs. It has an aromatic warming and astringent taste, not at all unpleasant. It seems to possess properties very much like those of piper-methysticum, and it can be used in the same conditions, as a tonic/ combined with very small doses of specific nux vomica it is very efficient. In tuberculosis, it has repute among the natives, and especially in tuberculosis with great weakness, and tendency to hemorrhage. If it be added to specific medicine, lycopus, it will give good results.

For feebleness of the mucous membranes, with a tendency to braking down of the tissues, given internally and as far as possible applied locally, it gives good results. In gonorrhoea and such urinary troubles where cubebs are given, anemopsis is good. In painful diarrhoea and dysentery with passages of blood and mucus, also in bad cases of typhoid, Dr. Oliver spoke very highly of it. The doctor in these cases used it in decoction, and so prepared it can be given freely.

In bad bruiss, in tibial ulcers, and also in syphilitic sores, it makes a good local application.

Dr. Munk of Los Angeles used it for some time in nasal catarrh. He adds from ten to thirty drops of the fluid medicine to a two-ounce prescription, consisting of glycerin, one dram, aqua dest. to make two ounces. This is used as a spray in the head and the throat every two to four hours. He has had considerable success with it.
The specific indications for its use in catarrh are, “a full, stuffy sensation in the head and throat.”

It is a mucous membrane remedy, and whenever we have cough with expectoration, or wasting discharges from the bowels, or urinary tract, it is indeed a good remedy. When using it locally, as in catarrh, be sure and give it internally. The compound syrup of the hypophosphites makes a splendid vehicle in which to administer it.