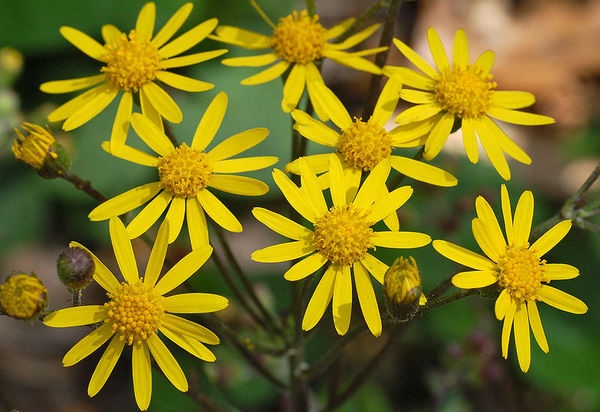 As strange as it sounds, the Eclectic Physicians called this plant the female regulator! Anyhow, it was used to improve gynecological health. that said, it may contain compounds that are toxic and this one should not be used to regulate females until more is known.

1874: Scudder
Prepare a tinctue form the fresh hera nd root, 35viij.to alchol 76% Oj. Dose from gtt.j to gtts.x. Much disapointment has been experienced from the purchase of the crude article when old, and from worthless prpearaions. I would advise the practitioner to prepare his own tincture form the fresh plant.

The senecio exerts a specific infuence upon the reproductive organs of the female, and to a less extent upon the male. It relieves irritation and strengthens functional activity. Hence is has acqired the reputation of a uterine tonic. It may be prescribed in all cases in which there is an atonic condition of the ovaries or uterus, with derangement of function. It makes little difference whether it is amenorrhea, dysmenorrhea, or menorrhagia, or whether it takes the form of increased mucous or purelent secretion, or displacement. The remedy acts slowly and sufficient time must be given.

In the male we prescribe it in cases of fullness and weight in the perieum, dragging sensations in the testicle, and difficult or tardy urination. In both male and female we sometimes use it with advantage in painful micturition with tenesmus.

1898: Felter and Lloyd – SENECIO – LIFE ROOT
Action, Medical Uses, and Dosage – Senecio is diuretic, pectoral, diaphoretic, tonic, and exerts a peculiar influence upon the reproductive organs, and particularly of the female, which has given to it, especially the S. gracilis, the name of Female regulator. This is one of our valuable remedies in the treatment of female diseases. It relieves irritation and strengthens functional activity. Ovarian or uterine atony, with impairment of function, increased mucous or muco-purulent secretions, or displacements of the womb and vaginal prolapse, are the chief guides to its use. It is very efficient in promoting the menstrual flow, and may be given alone, in infusion, or combined with equal parts of asarum and savine, in amenorrhoea, not connected with some structural lesion. It will also be found valuable in dysmenorrhoea, sterility, and chlorosis. In menorrhagia, combined with cinnamon and raspberry leaves, it has been found very serviceable, when administered during the intermenstrual period, as well as at the time of ovulation. Tenesmic and painful micturition of both sexes is often relieved by it. Senecio often cures leucorrhoea when associated with weakness of vaginal walls, allowing uterine displacements, and accompanied with vascular engorgement and pelvic weight. Senecio is of value in many genital disorders of the male, the indicatious being pelvic weight and full, tardy, or difficult urination and sensation of dragging in the testicles. Senecio aids digestion when tardy from congested or relaxed conditions of the gastric membranes. It is also useful in capillary hemorrhage, especially in hematuria, and in albuminuria, with bloody urine. Pulmonary hemorrhage has also been checked by it. It has proved an excellent diuretic in gravel and other urinary affections, either alone, or given in combination with other diuretics, and is said to be a specific in strangury. In pulmonary and hepatic affections it has proved advantageous, and, aken freely, the decoction has effected cures of dysentery. This remedy produces its effects slowly in chronic disorders. Dose of the decoction, 4 fluid ounces, 3 or 4 times a day; specific senecio, 1 to 30 drops.

1898: Webster
This remedy seems especially adapted to the gastro-intestinal disturbance of bottle fed babies when milk is the diet used. In cholera infantum and infantile diarrhoea arising during hot weather, aethusa rivals ipecac in its beneficial effects.

Though authors have attempted to discriminate as to the particular symptoms that call for the remedy the knowledge of its specific affinity and application will be sufficient to enable one to apply it in practice without such symptoms as “great anguish and crying; disposition to jump out of bed and escape from the room; great anxiety expressed by the face, often accompanied by the lines nasalis,” etc. All these symptoms might occur in an ipecac case, and this remedy help promptly. When symptoms can be made to assist in the selection of a remedy they are to be desired, but not to cumber the ground with needless verbiage. Aethusa may be found useful where ipecac would seem indicated and fail, upon trial, to cure.

Form for Administration- The 3x dilution from the tincture of the fresh plant. That found at a homeopathic pharmacy will usually be reliable.

Dose- Add a drachm to four ounces of water and give a teaspoonful every hour.

Senecio is diuretic, tonic and emmenagogue. Its influence upon the female reproductive tract is very marked and for the conditions named below it is surpassed by no remedy – namely, to relieve irritation and strengthen functional activity. For leucorrhoea, with relaxed vaginal walls, with increased mucous or muco-purulent discharges it is an admirable drug. When micturition is painful and tenesmic, in both sexes, senecio promptly relieves, while in strangury it is reputed specific. It is for its power to bring on and regulate the menses in young women that we would particularly emphasise it. In these cases there is anaemia, often chlorotic anemia, which clears up as the menses are restored. There is marked weakness with tendency to faint; the perineal tissues feel heavy and full, and there is more or less leucorrhea. In older women, especially those who have borne children, it relieves uterine enlargement, with cervical or uterine leucorrhoea, and marked atony with functional impairment. While the effects of this remedy are slowly produced they are just as surely secured. The dose of specific senecio is from 1 to 30 drops every 4 hours.

Use: Its special action is on the reproductive organs of both sexes, but especially of the female. A tonic to the nervous and muscular structure of the reproductive organs of the female, with a tendency to bring about normal action and therefore applicable alike in amenorrhoea, metrorrhagia, menorrhagia or dysmenorrhoea. We think of it in a relaxed condition of the uterus and its appendages, relaxed condition of the support of the uterus resulting in displacements. In hyperaemia, atonic or irritable condition of the pelvic organs. Regulates the periodical discharge. Irregularity with pain and weakness in the pelvic region, headache in top or back of head. Pain worse at menstrual period. Of value in capillary hemorrhage, haematuria in large doses, albuminaria, especially during pregnancy, leucorrhoea, chlorosis. Of value in engorged atonic condition of the sexual organs of the male, increasing functional activity of these as well as overcoming irritation of urinary apparatus. Its action is slow and it must be continued for some time for good results.

1911: Fyfe
Enlargement of the uterus, with uterine or cervical leucorrhea, diseases of the reproductive organs of women, characterized by a sense of fullness, weight and dragging pelvis, soreness, pain, and bearing down in the region of the uterus, suppressed menstruation, atonic conditions of the ovaries and uterus, with impaired function, vicariius menstruation, defective action of the uterus, fullness and weight in the perineum, with draggins sensations in the testicles, difficult and tardy urination in the male, pain micturition with tenesmus, dyspepsia, attended with flatulence after meals, excessive secretion of gastric juice, with acidity, and cardialgia.

Senecio is one of our most reliable remedial agents. Chlorosis, amenorrhea, dysmenorrhea, menorrhagia, sterility, and dyspepsia are mong the most prominent abnormal conditions likely to present indications for its employment.