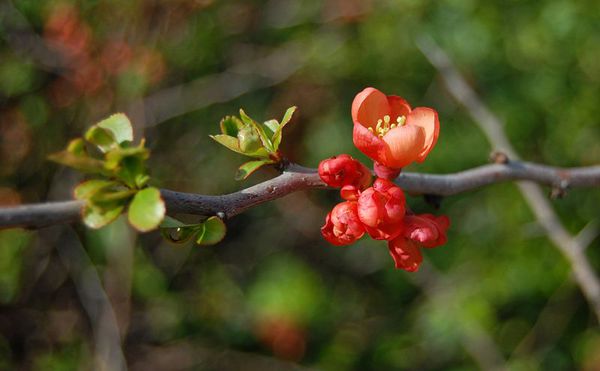 Principal Use: Cough and Cold Cure

History and Traditional Uses of Karin
Karin is indigenous to China but was introduced to Japan in ancient times. It is now cultivated mostly in the northeast and middle districts of Japan. A deciduous tree, growing up to eight meters in height, it produces pale pink flowers the size of a pencil head in the spring. Apple-like yellow fruits follow in the fall. The fall landscape,

filled with the trees heavy laden with fruits is a marvelous sight. The raw fruits are hard, bitter and sour – far too bitter to eat out of hand.

In Japanese medicine the ripe fruits are harvested in autumn and dried in the sun. The drug is seen as analgesic, anti-spasmodic and antitussive. A decoction is considered highly effective at combating respiratory infections and fortifying a weak constitution.

For the most part, Karin is used as a domestic antitussive and expectorant agent used to treat coughs and colds. A number of homemade medicines are produced by country people to treat respiratory infections. The ripe fruits are either boiled with sugar to make a syrup, or soaked in clear, strong alcohol and then sweetened to make an alcohol based syrup. Both the syrup and the liquor are considered to be nutritive tonics and soothing anti-cough agents ideal when coughs and colds strike.

The famous Japanese illustrated encyclopedia ‘Wakansansaizue’ published three hundred years ago mentions using Karin to treat coughs and phlegm. The recipe suggests the juice of Karin and the root of ginger be made into a paste. The paste is then sweetened with sugar. This ancient cough remedy is still made and used in Japan today.

Anti Inflammatory
Respiratory infections involve a lot of inflammation, in this case inflammation of the respiratory tract. Karin has been shown to reduce inflammation. One study showed that decoction of Karin decreased swelling from artificially induced arthritis in mice!

Another study found that Karin had a potent anti-inflammatory effect. The research found that the anti-inflammatory action of Karin was due to the polyphenols (tannins) contained in the fruit. They inhibited histamine release from rat mast cells and inhibited hyaluronidase, an enzyme associated with bacteria caused inflammation.

Practitioners’ Opinion
Karin syrup and Karin liquor are an age old Japanese treatment for coughs and colds. It is palatable, so it can be used by all ages. Indeed, as it is a nutritive tonic, it is an excellent remedy to cure a cold and help speed convalescence from a cold, especially in the old and the young.