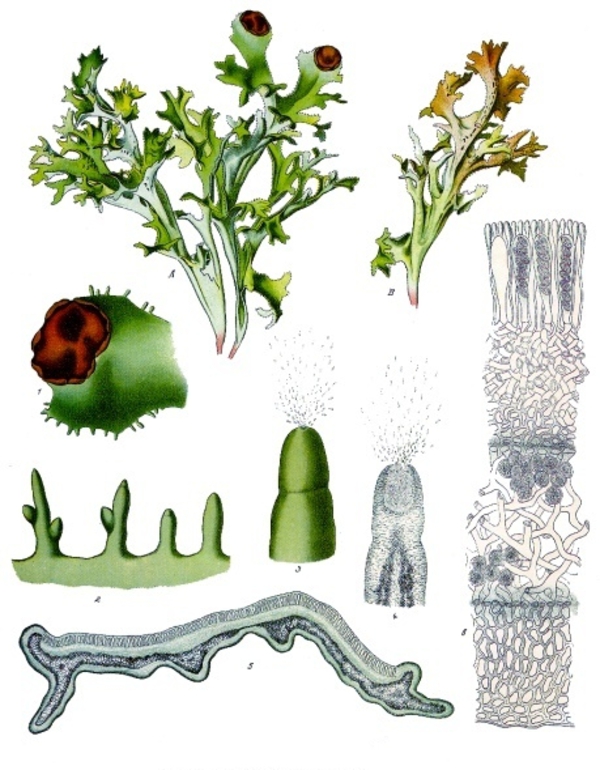 1909: Felter and Lloyd: CETRARIA (U.S.P.) – CETRARIA
History – This lichen is a native of the mountainous section of Britain and the northern countries of Europe, particularly Iceland . It is found as far south as France , Italy , Switzerland , and Spain , growing in mountainous elevations. It is likewise found in the antarctic countries, British America, and in the United States from the eastern states to the mountains of Carolina and westward to the Rocky Mountains, from Colorado northward. In northern Europe it has long been used for food under the name mosi, mus, or mossa (Pharmacographia). Though called Iceland moss, none is exported from that island. It is diversified in color, being brownish or grayish-white on some parts, and of a reddish hue in others; it is without odor, with a mucilaginous, bitter, somewhat astringent taste, and when dry the lichen is crisp, cartilaginous, and coriaceous, an dis convertible into grayish-white powder. It swells up in water, absorbing more than its own weight of that fluid, communicating a portion of its bitterness to it, as well as a little mucilage. When long chewed it is converted into a mucilaginous pulp, and when boiled in water the decoction becomes a firm jelly on cooling.

Action, Medical Uses, and Dosage – Demulcent, tonic, and nutritious. Excessive doses may induce nausea and looseness of the bowels, while ordinary doses improve the appetite, digestion, and general nutrition. Constipation is not produced by it, and the circulation is unaffected. Its nutritive qualities are undoubtedly due to its starch. The bitterness of cetrarin may be detected in the nursing mother’s milk. Used as a demulcent in chronic catarrhs, chronic dysentery and diarrhoea, and as a tonic in dyspepsia, convalescence, and exhausting diseases. Boiled with milk it forms an excellent nutritive and tonic in phthisis and general debility. It relieves the cough of chronic bronchitis. Its tonic virtues depend on its cetrarin, the bitter principle which, if removed, renders the lichen merely nutritious. Dose in powder, 30 to 60 grains; of cetrarin, 1-1/2 to 3 grains. The jelly and decoction are most generally employed.

1911: Fyfe
Used mainly as a food for infants having weak digestive organs. It may be boiled in water or in milk. cetraria islandica is demulcent, tonic, astringent, and nutritive.