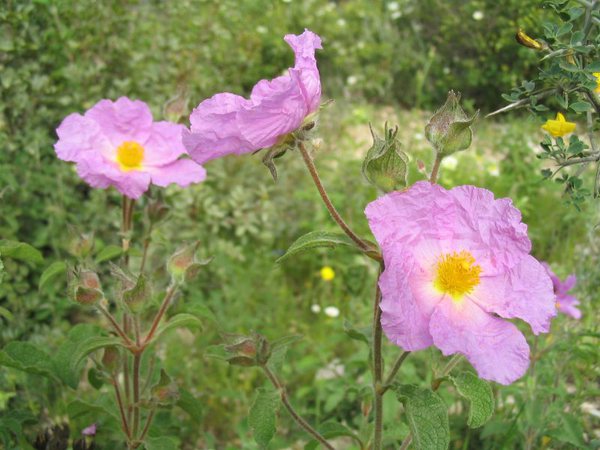 1874: Scudder
Preparation – A tincture is prepared from the recent plant, in the proportion of 3viij. to Alcohol 76 degree Oj. The dose is from ten to thirty drops.

The Cistus has a direct and positive influence on the processes of waste and nutrition, and hence possesses the properties known as alterative. It has been used with especial advantage in scrofula, and in chronic diseases dependent upon an enfeebled nutrition, or deposit of imperfectly formed plasma.

It has also reported to have a specific influence upon the intentinal canal, curing chronic diarrhoea and dysentery. It deserves a thorough investigation, which I trust some of our practitioners will give it.

1898: Webster: (Lymphatic System)
The rock rose enjoys considerable of a repuation among the homeopathists as a remedy to influence the lymphatics, and is used by them in the treatment of scrofulous enlargements of the lymphatic glands, with sucess. Hale compares it iwth the antipsorics, calcarea, corydails, graphites, hepar sulphur, phytolacca, and stillingia. He asserts that he has made some brilliant ucres of swelling and suppuration of the cervical lypmphatic glands, and also of scrofulous abscesses, scrofulous hip disease, scrofolous eruptians, as tetter, crhoinc erysipelas, etc. wit it. He further asserts that it has a dediced afinity for the glands of the mucous mebranes, thus proving highly valuable in scrofulous opthalmia, scorbutic gums, and catarrhal inflammatio of the nasal and pulmonary passages. It might be thought favorably of in scrofulous afections of the mesenteric glands.

Forms of administration: The tincture from a reliable homeopathic pharmacy.

Dose: From the fraction of a drop to ten drops.

1898: Webster: (Digestive System)
Rock rose specifically influences the mucous membrane of the mouth and throat, and is particularly applicable to the treatment of chronic pharyngitis, thus being in the same class with penthorum. It is useful in long standing pharyngeal irritation, where there is dryness of the membrane, blueness, with tickling, itching, and other irritation in the pharyngeal vault.

It sometimes proves useful in laryngeal irritation due to contiguity to an irritated pharnynx. It then may be capable of relieving tickling, laryngeal cough.

Cistus also influences the digestive tract lower down and has been successfully employed in the treatment of chronic diarrhoea and dysentery.

In sponginess and scorbutic irritation of the gums, where there is tenderness and bleeding about the teeth, this is a reliable agent.

Form for Administration-The tincture supplied by a reliable homeopathic pharmacy
Dose- Add a drachm to four ounces of water and give a teaspoonful four times daily, in chronic inflammation of the pharynx. In more acute troubles the dose should be repeated oftener.

1898; Webster; (Articulations) – Cistus Canadensis
Rock rose is a remedy recommended by various homeopathic authorities for scrofulous hip-disease and white swelling. It has not been very extensively used, and therefore lacks a thorough test, but it stands high as an anti-scrofulous remedy, and doubtless possesses virtues to commend it in such cases, even though no marked tissue-affinity exist.

Form for Administration. – The mother tincture, sold at homeopathic pharmacies.

Dose. – Add ten drops to four ounces of water and give a teaspoonful four times daily.