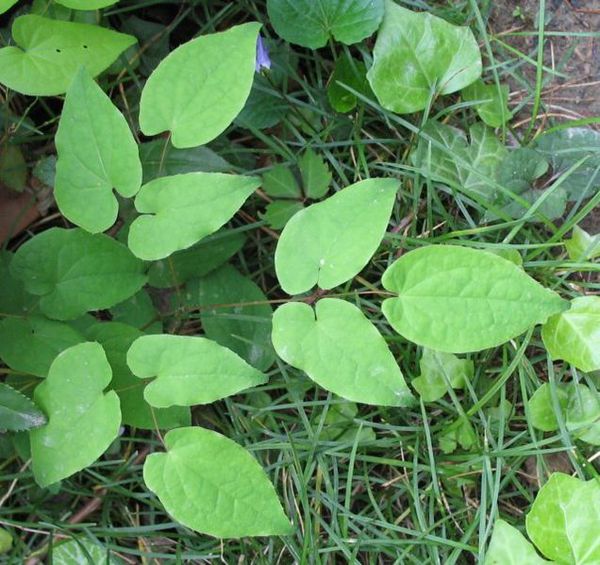 History and Traditional Uses of Ikarisou
Ikarisou is a perennial plant, native to middle and southern parts of Japan. It has many close relatives growing in China and these plants, whether from Japan or China, are used for similar purposes. In Chinese, the plant’s name translates to “lascivious goat wort”. The legend being that goats feeding upon the plant can copulate one hundred times a day. The legend may be optimistic, but, it is true that the plant is used as an aphrodisiac throughout Asia. And a long used aphrodisiac it is. It is mentioned in ‘Shinnouhonzoukyou’, the oldest Chinese herbal, reported to have been printed 1400 years ago.

In Japanese, the word Ikarisou, refers to the shape of the plants leaf. The stem and leaf look rather like an anchor. In Japanese, Ikari means anchor and sou means herb. The plant’s flowers are pale pink or white and appear in April and may. The parts used in medicine are the leaves and stems which are harvested in May and June and dried in the sun.

In Japan, Ikarisou is highly prized as an aphrodisiac and has long been used to treat impotency, infertility, and lack of libido in men. In women, it has been used to increase sexual desire and fertility. This is the sexual health plant of Japan!

But, this is not its only use. For as long as anyone can remember, it has been seen as a powerful tonic with the capacity to strengthen the body, especially for the elderly. It is said to improve memory in the elderly, remedy paralysis caused by stroke, strengthen the lumber spine and knees, improve numbness of limbs, resolve insomnia, cure chronic bronchitis, settle dyspepsia, reduce high blood pressure, improve rheumatic diseases, and remedy a host of nervous conditions. Country people say that when a person needs a boost in vitality, this is the herb of choice, especially if the person is packing some years.

When illness strikes, an increase in vitality improves the condition, no matter what the specific illness may be. Ikarisou is the vitality supplement of choice in Japan.

The plant is so popular it has been the subject of much scientific research!

Aphrodisiac
In one animal experiment, dogs given Ikarisou extract showed increased semen secretion. It is thought that flavonoid icariin and alkaloid magnoflorine contained in its stems and leaves are responsible for its action on the sexual apparatus.

Ikarisou increases sexual activity, increases sperm production, stimulates the sensory nerves, and thereby indirectly increases sexual desire. This herb has a moderate androgen-like effect on the testes, prostate gland, and levator ani. It has not been shown to have any estrogenic effect.

One of the leading causes of erectile dysfuntion in the elderly is poor circulation. Blood is not efficiently delivered to the penis. Research has shown Ikarisou helps in this department on several levels.

Another research project showed it had hypotensive, hypolipidemic, and anti-platelet aggregation activities. Isoflavones found in the plants leaves have been found to be responsible for these activities. The anti-platelet aggregation activity of the herb in part explains why it has been found to improve stroke and prevent stroke. The blood is made less sticky and can flow through clogged arteries in a more efficient manner.

The effect of icariin on myocardial activities was studied in rabbits and compared with an aqueous extract of E. grandiforum containing icariin. Intravenously injected icariin (1mg/kg) and the extract at a dose equal to 1g plant/kg did not significantly change the heart rate and/or electrocardiogram results. Other myocardial and circulatory indices indicated that both icariin and the extract decreased the peripheral resistance, suggesting their usefulness in treatment of hypertension-complicated coronary disease.

Immune Stimulant
Ikarisou also has been shown to regulate the immunological functions. It enhanced the functions of antibody-forming cells as well as the excitatory state of the lymphatic cells. It is also increased the phagocytic activity of the monocytes and the number of T cells. In a vitro study, the methanolic extract of the leaf of Ikarisou markedly inhibited the proliferation of mouse lymphocytes induced by mitogens and the mixed lymphocyte reactions.

The polysaccharide isolated from Ikarisou was found to accelerate the production of T-suppressor cells of immunized mice and to inhibit the antibody production in recipient mice.

Icariin on the other hand, increased the production of T-suppressor cells – antibody titer was therefore markedly elevated.

In a clinical study, 22 cases of leukopenia unresponsive to conventional treatment were treated with an infusion made of the leaf of Ikarisou. Of the 14 patients who complied with the treatment, 3 were cured and 9 significantly improved. The leukocite count was increased from 2440±992/ to 4060±966/.The immuno complex titers and serum Zn 2+ and Mg 2+ were decreased. The lymphocyte transformation rate was also significantly increased.

Practitioner’s Opinion
Ikarisou can be used whenever there is a loss of vitality, whether the diminished vigor as a consequence of age, hectic work schedule, or chronic disease. When vitality is on the wane, this herb is often helpful. It is also extremely useful when lack of sexual desire or performance is an issue. Many have found improvement of their sexual difficulties with the use of this herb.