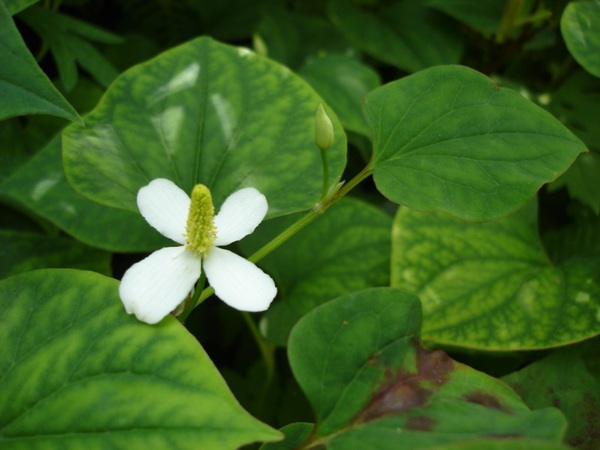 This is one freaky plant. From a far it just looks cute, but, when you crush it, it exudes a smell that is somewhere between fish and cilantro. Its an Asian addition to the medicine chest, and, long used to stimulate vibrant health. If you can get past its unusual smell!

History and Traditional Uses of Dokudami
Dokudami is a perennial herb native to Japan. A vigorous grower, it can be seen growing in hilly areas, fields, roadsides, and even between the cracks of asphalt. When pressed in the hand, it emits an unpleasant odor-in Vietnam it is called fish mint. The ancients could not miss this plant and it found its way into medicine early in human history.

In regards its ancient uses, the plants common name is highly telling. Doku means poison and dami means blocking. Dokudami translates to “the poison blocking plant”. Ancient people used it to counteract the effects of poisoning, a common practice amongst warring factions of the times gone by.

One of the top ten healing herbs in Japan, Dokudami is easily one of the most revered and popular herbal medicines. In folklore medicine it’s used fresh and dry. When fresh, it’s applied as a poultice, added to the bath, eaten as a salad, and pressed for its juice. In the dry form it’s decocted as tea and made into a medicinal powder.

However, at the root of things, Dokudami is seen as a detoxifier, cleansing the system by acting as a mild laxative and diuretic. In traditional Japanese medicine, toxins in the system are seen as the source of disease. This plant was seen as moving the toxins out of the body and thereby removing the source of disease. So popular is this plant the Japanese Medicines Codex, prepared by the Japanese Ministry of Welfare, approves it as a diuretic. In the modern age, very few medicinal plants retain a place in the Japanese Medicines Codex! When a person needs gentle detoxification, Dokudami is the plant.

The distinctive odor of raw Dokudami comes from a compound, decanolacetaldehyde, found in its essential oil. Decanol-acetaldehyde has been proven to be a powerful disinfectant and antimicrobial agent. Research shows it is specifically active against staphylocccus bacterium and a collection of fungus.

Linalool has also been shown to increase immunity and the phagocytic activity of leukocytes.

Another constituent, chlorophyll, promotes detoxification. The synergy between decanolacetaldehyde and chlorophyll is said to make it an excellent agent in wounds, acne, boils, ringworm, athletes foot, and insect bites. The Japanese belief is that this herb gets the body to eliminate toxins at the root of the problem.

The leaves of the plant are rich in potassium salts which causes the excretion of sodium. In turn, the excretion of sodium causes an excretion of water. The end result is diuresis or increased urination. It acts like an herbal water pill and results in a drop in blood pressure. In addition, quercetine has diuretic effects. It does this by increasing renal blood flow.

The plant also contains peculiar flavonoids which strengthen capillaries. So strengthening to small blood vessels, it can be used to stop bleeding. Taken long term, the integrity of the blood vessels improves and results in improved circulation. Immune cells are better able to move around the body removing toxins.

Practitioner’s Opinion
The contemporary lifestyle involves ingesting large quantities of toxins. The air we breath, the food we eat, the soap we wash with, and the deodorant we apply are rich in toxic compounds the body must eliminate. On top of this, people smoke, drink alcohol, and take recreational drugs. Many feel the proliferation of chronic diseases in contemporary society stem directly from body pollution which is the rule and not the exception. When toxins are building up in the body, and ill health is resulting, Dokudami, is highly recommended. First used to rid the body of an enemies poison, today, its being used to do the same. The recommendation is for people to use it one day a month to cleanse the system of toxins.Research indicates that many of the active consitutents of Dokudami are lost in the drying process and that it is best used fresh. In response, a Japanese winery invented a special fresh Dokudami wine. They have succeeded in extracting the complete medicinal elements of the plant and at the same time removing its unpleasant odor. Quite a feat! The winery uses only two ingredients to make the wine, Dokudami and honey. No preservatives, colorings, or artificial flavors are added!