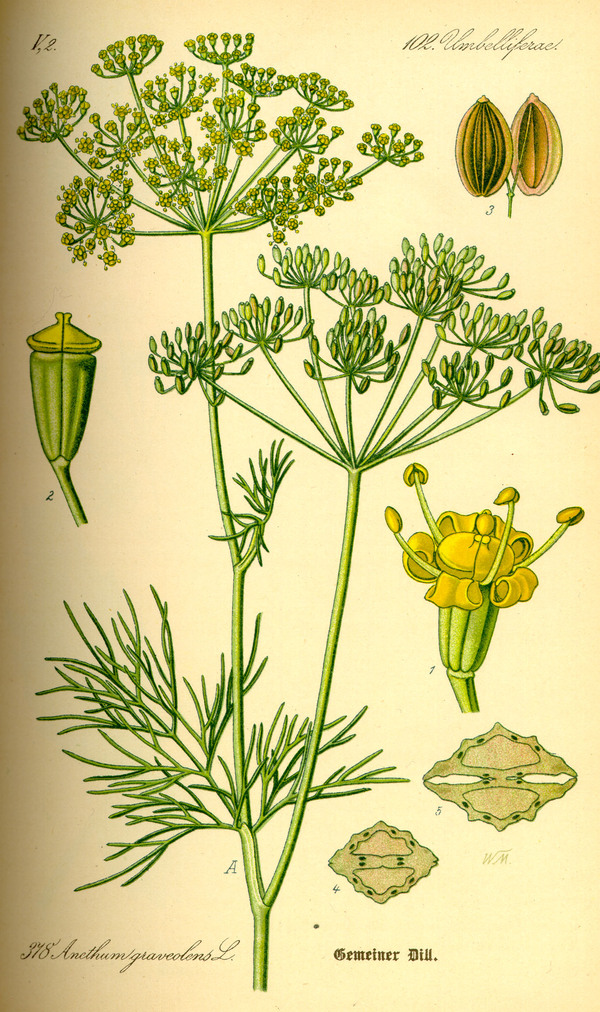 Common dill seed is one of the oldest aphrodisiacs in the book and quite readily available to the student of aphrodisia. The herb’s seed has references in the Bible, and its use predates written record. Dill pickles may be something more than something to get on the side of a corned beef sandwich.The word dill is said to come from the Norse word Dilla, meaning dull. Chewing the plant can dull sensation of the tongue, and that’s about all it dulls.

Gerard had a few words to say on dill, “The decoction of the tops of fried dill, and likewise of the seed, being drunk, ingendreth milke in the breasts of nurses, allayeth gripings and windinesse, provoketh urine, increaseth seed, stayrth the yeox, hiceket or hicquet, Discorides teacheth.” He goes on to say, “the common oyle, in which dill is bouled or pummeled, as we do oyle of roses doth digest, mitigate paine, procureth sleepe, bringeth raw and undigested humors to perfect digestion, and provoketh bodily lust.”
Gerard along with many other herbalists of ancient days saw dill as a great way to stirre up the bodily lust, with the only side effect as being increased fertility, which could be a problem.

The traditional way to use this herb is to grind the fresh seed, mix with honey, oil your hands and roll up little pills, several taken a few hours before the deed is to be done. This one is good for girls and boys alike. Some recommend the seed ground fresh and added to a glass of wine to get the love skud fired up.

“Alas, when once in a garden the mallows have died, or the green parsley, or blooming crisp dill, they live again after, and spring up another year. But we, the great, and brave, or wise of men, after we have once died, sleep a right long adn boundless slumber from which none are roused”
Idyll iii moschus

Dill is frequently refered to as dill weed for a good reason, it is a weed par excellance. Once you’ve planted it , you’ll neverhave to plant it again. Dill is related to the carrot, parsnip, parsely, fennel, coriander, carroway, celery, anise, and angelica .this one family provides humanity with more flavoring than any other plant family. Of all the members of this family dill is the most vigorous. Gardens are always filled with weeds. My concept is , if im going to have weeds, they might as well be useful weeds. Each year i have to weed the dill out of my beds, and i use every bit. In history just the seed of the dill was used but today the leaf has found its way into many dishes.

I have a really funny dill story. Atleast i think its funny. If youve ever ordered seeds from catalogue you’ve noticed in the cucumber section they make a point of stating, burpless cucumbers. I had seen this but never really understood the point. Untill i took a trip to the middle east. I was traveling through the desert with some bedouin traders. In our little car packed with too many people came a big bag of cucumbers. The desert is real dry and people carry chilled cukes as refreshment. Being terribly thirsty i ate a good half dozen cucumbers. After about one hour i felt the need to beltch such that i had never experienced. My stomach started growing and at the end of hte trip i looked eight monthes pregnant. I burped heiniously for 4 days non stop. In america we have bred our cucumbers to be burpless. And its a good thing, the older cucumber varieties can really make you burp.i now understand why they always state , burpless cukes. Our friend dill had a very specific medical use in days gone by, it reduced gas. It was known as the quieter of belches. Its from these days that the dill pickle came to the fore. I wonder if these two facts have any relation. Its curious that the ancients seasoned the fruit famous for its burp creating power with the quieter of burps. If you have probelms with burping you may want to increase you dill intake. Its fascinating to realize that even the dill pickle has its roots in strict utilitarianism.

Another point of note is that dill seeds, chewed are reported to cure hiccups almost immediatly. Our friend gerard, the 17th century herbalist had a few words to say about the dill weed. ” the decoction of the tops of dries dill and likewise of the seed, ingendreth milke in the brests of nurses, allayeth grippings adn windinesse, provoketh urine, increaseth seed, stayeth the yeox, hicket or hicquet, as sicorides teacheth. ” aside from bringing on mothers milk and curing hiccups, gerard goes onto to say that burnt dill can help a sensitive matter. ” galen saith , that being burnt and layd upon moist ulcers, cureth them, especially those in the secret parts.” i think all us grwon ups can figure out what that means. As with most herbs, dill was first used for medicinal purposes.

The botanical name for dill is anethum graveolens, anthetum coming from the greek verb to burn. This refers to the sensation the tongue experiences when in contact with freshly chewed dill seeds. Like most herbs dill is a mediteranean native. Its mentioned in egyptian heiroglyphics and has numerous biblical referances.
People always value that which is in short supply and dill has never been scarce. As far back as the biblical period dill was considered a trash herb. It would seem that in matthew 23:22 refernce is made to the pharisees insulting the king by offering three porly valued herbs as a tribute, one of which was dill. Dill has been a common herb since anitquity and as well onehas beenone of the most used herbs. Aside from its pickle use, dill finds its way into gin, curry powders, and stomach quieters. Two hundred years ago and back dill was a must for pea and meat soups.

Back to you and dill, this is a fail proof herb. If you can kill silk plants you can successfully grow dill. The best part about growing dill is that you dont even have to grace the portals of a garden center or dial a mailorder house to grow some. Just head to the supermarket and pick up a bottle of whole dill seeds in the spice section. Ironically dill seed from a plant supply cost about 20 times as much as buying them at the grocery store. Ive planted both and have had equal results. I can tell the difference except in the start up cost. You can go ahead and buy starter plants or seeds from the garden center , but you are wasting your money.

Dill can be grown in a pot or in the ground, depending on your space circumstance. Well start with those fortunate enough to have some exteriour space. When you get ready to plant your dill look around your yard and see if you dont have some unused space, left empty because it seems undesirable for plants to grow. In my yard i had this area out by the ally , right next to the garbage cans. The soil was loaded with broken glass and concrete chunks. Weeds just grew over this little peice of soil before i got the idea to grow some useful weeds. All this to say, dont use up any coveted garden space for your dill, this side of the compost pile will do just fine. In whateve space you decide to use, the time to plant your dill is very early spring, say before easter. Loosen the soil in the dill weed spot, just enough to get the seeds i inch below soil surface. Sprinkle a handful of seed into the soil and rake them into the ground. Thats it, the dill weed will do the rest. As i mentioned , today we use dill leaves as well as the seed. The plants will spring up in the spring rains and the leaves are fair game for your cooking as soon as they are big enough to use. The plants will set flower in the late summer. The seeds follow and should be collected as soon as they start to brwon. When you go to harvest your dill seed, leave a few seed stalks in the garden, the seeds will drop into the soil and lead to next years crop. Ive had gardenrs completly pick the dill seeds and wonder why the dill didnt come up the second year. If you dont some dill seed in the garden you wont have dill the next spring. And you may be so sick of dill that you dont want anymore. I put the dill stalks into a brwon bag and leave in a dry location. The seeds are initially attached to the seed heads but in time drop off. After a few weeks of drying in the bag, shake the seed heads and the seeds will fall off and remain in the bag ready for your use.

Now as to grwoing dill in pots. Dill can be grwon year round in pots and even for use yarded gardeners dill is great to grow in pots. I usually plant a pot of dill seed in december and leave it next to the window. The dill sprouts and produces lots of great herb all winter long. The potted indoor dill isnt likely to bloom and make a lot of seed, but the green leaves provide an added green in the dead of winter which is fun. To grow some dill at the window or on the terrace start by geting your seed. Take a container, anything from a terracotta pot to a halved plastic milk container will do, and fill with potting soil. For a container the size of half a milk carton sprinkle 1 teaspoon of dill seed on the top of the soil. Miosten the soil completly and cover the container with a plastic wrap. As soon as the seedlings appear take the plastic off the container and leave in as full sun as you can get. The dill will grow rapidly and finish its production in about 8 weeks. To have dill all winter , start new pot once a month. And pick away. Dont worry about fertilizing, the potting soil has enough nutrition to last 6 weeks. The only care the potted dill plant needs is lots of water. They grow fast and use up tons of water.

One other note on dill, in the dark ages and even more recently, dill was considered to be the enemy of all witches. Lore has it that the wtiches find it absolutly repulsive. Witches will not cross the door that holds a piece of dill. Drayton says” therewith her vervain and her dill, that hindreth witches of thier will”. In basque lore the forces of good and evil have a battle each spring. The opposing forces stage a fight, and if the good win, the spring will come early , and if they loose, spring will come late. The withces good and bad, fly from their houses on the prescribed night, and assemble on the battle ground. The only tool the good witches carry are stalks of dill. A powerful tool against the forces of evil. Perhaps batman should check dill stalks out.