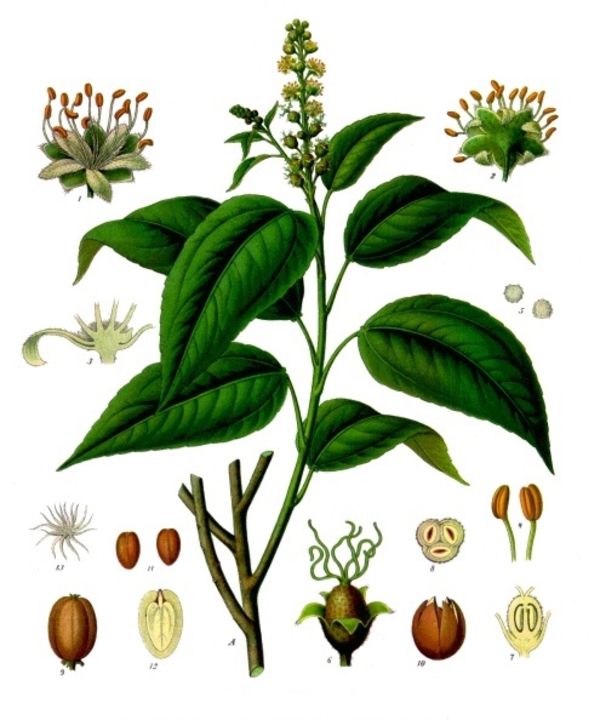 Therapeutic Action – The Cascarilla bark is tonic, stomachic, stimulant, aromatic and diaphoretic. It was at one time extensively employed in Europe as a febrifuge in intermittent and remittent fevers, in the place of cinchona, and by some regarded as superior to that article. Its aromatic and stimulant properties, which it possesses in a high degree, render it much more acceptable to the stomach.

In large doses it acts as a general excitant as well as tonic, causing an acceleration of the pulse, increased heat of the body and diaphoresis. It may be used with advantage in atonic states of the stomach attended with flatulency.

The expressed oil of the seeds of croton tiglium ‑ East Indies . Dose: Croton oil is administered in doses of one or two drops; in cases of coma and where there is great torpor or insensibility, from five to ten drops will produce but a feeble impression upon the patient. It is better to administer it in pill or emulsion, and half a drop at a dose, repeated sufficiently often to obtain its effects.

Therapeutic Action: Croton oil is a speedy and powerful hydragogue cathartic. If we except elaterium, it is more energetic, and produces more effect upon the system in minute doses than any other cathartic agent. The activity of the oil, the certainty and efficacy with which it acts, and the smallness of the dose required to produce these powerful impressions upon the system, together with the facility with which it may be taken, and the comparative mildness of its action, render it an agent worthy of notice.

It may, however, be so administered as to produce vomiting, hypercatharsis, violent tormina, gastro‑intestinal irritation or inflammation, or even fatal results. It is evident that an agent of such powers should be administered cautiously, and so combined with demulcents and aromatics, and so timed, as to render its operation as mild as possible.

If administered in cases of great debility, it should be so combined with demulcents and stimulants as to prevent its irritant and exhausting effects. It acts rapidly, often in one hour, and frequently produces a disagreeable burning in the fauces and throat.

In cases of mania or furious delirium, the facility with which it can be administered gives it a superiority over all other cathartics. If the patient will not take medicine, he may be deceived by giving the oil in wine, milk, etc., and thus its full advantages are secured. In spasm of the glottis, epilepsy and neuralgia, it is supposed to prove valuable, independent of its purgative property. The seeds have been used in India for their cathartic powers, in doses of one or two grains; they are not used in this country. Four drops of the oil, applied to the umbilicus, often purges.

Applied externally it acts as a suppurant revellant, producing rubefaction and finally vesicular and pustular eruptions, and proves a valuable derivative. It has been employed for this purpose in chronic bronchial affections, phthisis, chronic laryngitis, rheumatism, neuralgia, glandular enlargement, spinal diseases, etc.; it is sometimes used in its pure state, but more frequently diluted with olive oil, turpentine, alcohol, etc.

1911: LLOYD
The genus croton, established by Linnaeus in 1737, is extensive, 625 species being recognized in the Index Kewensis. We have a number of herbaceous species in this country, but none of any economic importance. The croton plant is a native of India and is grown all through the East Indies . It is a small tree fifteen to twenty feet high.

Croton tiglium is considered indigenous to Malabar , Ceylon , Amboina (of the Molucca Islands ), the Philippines , and Java. Joannes SCott (588a), in his disssertation on the medicinal plants of Ceylon ( Edinburgh , 1819), states that the seeds of Croton tiglium under the name of “gayapala” are a most powerful purgative, and also that the leaves are very acrid, causing an intolerable burning in the mouth and throat.

Dr. Irvine, in 1848, gave a short account of the materia medica of Patna (part of the province of Bengal ) mentioning “jamalgoota,” which he stated is derived from croton tiglium and several other species of croton. The croton seeds furnish a violent purge and are made into pills with giner and “kutkaranja or kath karanja seeds,” which he explains are known as bonduc nut (the febrifuge seed of caesalpinia bonducella, or nicker tree).

More recently, Mr. O. Wenyton (682) calls attention to the occurrence of croton tiglium in all parts of the fertille and wealthy province of Assam , especially in the dry districts. He states that the demand for the drug is small and that the plant has a tendency to spread. Hence efforts are being made to restrict the growth and keep it within certain bounds.

The ancient Hindu physicians were not acquainted with the drug, which seems to have originated in China, from whence at an early day the seeds were also introduced into Persia (where they are now called dand ), by way of the caravan routes of Central Asia. Subsequently the Arabs derived their knowledge of the seeds from the Persians, their name, hab-el-kathai ( Cathay seeds), being in turn suggestive of the Chinese origin (209). Some of the veracular Indian names, according to Dymock, seem to indicate that the plant reached India through the Himalayan province of Nepal (209).

The Drug was imported into Europe by the Dutch during the sixteenth century. The first account of the croton tiglium plant in European literature, however, must be credited to the Portuguese physician Christoval Acosta, who in 1578 described the wood as lignum pavanae (or L.panavae or L. moluccense), and the seeds as pini nuclei moluccani (3). The prominent writings of Rheede (1678), who gives the Malayan name cadel avanacu (547), Ray (1688) and others subsequently, gave the drug due consideration, while C. Bauhinus (1671) differentiated between several synonyms of the seeds and woods that were then in use. To Caspar Commelyn (1667-1731) is attributed the first use of the name cataputiae minores for the seeds, while the well-known synonym tiglii is also stated to have been originated in his time. And yet this author’s work on the Flora Malabarica (1696) does not record the first term, although the name grana tiglii is therein accredited to Samuel Dale’s Pharmacologia, (the first edition of which appeared in 1693) (179).

As regards the use of the oil derived from the seeds, E. von Hirschheydt, in the exhaustive historical introduction to his dissertation (318a), mentions that Peter Borellus, a French physician (1620-1689), in 1657 lauds the cathartic virtues of the oil which in as small an amount as two drops caused purging even when merely rubbed into the skin. Similar mention of its virtues is made by Rumphius (Herbarium Amboinense, 1750). Geoffroy (260) in his Materia Medica (1756) reports that the natives of India use this oil to make what they call the royal purging apple (poma cathartica), the mere odor of which is said to purge persons of delicate constitutition. The directions for making this potent “apple” are as follows:

Macerate an orange or lemon in oil of tilli (croton oil) for one month. Remove it, hold to the nostrils and inhale the breath; soon afterwards the bowels will move.

About 1750, Cohausen, according to several authorities, employed the oil with success in cases of tenia.

Although during the seventeenth and eighteenth centuries the remedy had been frequently used, it seems that toward the end of the eighteenth century it fell into oblivion, probably on account of the dangers attending its administration. However, its use was revived when in 1812 several English physicians, among them Drs. White and Marshall, observed the action of the seed in medical practice in India , and brought the drug again to the notice of the profession in Europe (209). Ainslie in 1813, and Conwell in 1819, by their publications gave it further prominence. In connection with its reintroduction we note the interesting fact that a Mr. Short then brought the drug to Europe and was so fortunate as to secure the right (license) to its exclusive sale in England . That it at once became an important drug is shown by the attention then given it in medical literature. An extensive list of references to the literature on croton tiglium covering the period from 1820 to 1835 alone. may be found in Hirschheydt’s dissertation (318a). According to the latter authority (1890) the seeds and the oil are seldom used in Europe other than in veterinary practice, as he states, on account of the uncontrollable influence exerted by the presence of the powerfully toxic ricin (an albuminoid body) in the oil.

As already stated, the genus croton was established by Linnaeus in 1737, the name being adopted from the Greek synonym for cicinus communis, the seeds of which, as also those of croton tiglium, have a resemblance to a tick (dog-tick, kroton in Greek). As to the origin of the term tiglium, some authorities ascribe it to the Moluccan island of Tilho, while others (696) believe it to be derived (by Dale ?) from the Greek word tilos, meaning diarrhea. The botanical and vernacular synonyms antedating the name given by Linnaeus are numerous and are generally carried by the older botanico-medical works, e.g. by Dale (179), Baulhinus (47) and others. The post-Linnaean synonyms recorded in the Indexd Kewensis are rarely if ever seen in pharmaceutical print and may well be reproduced. They are as follows: