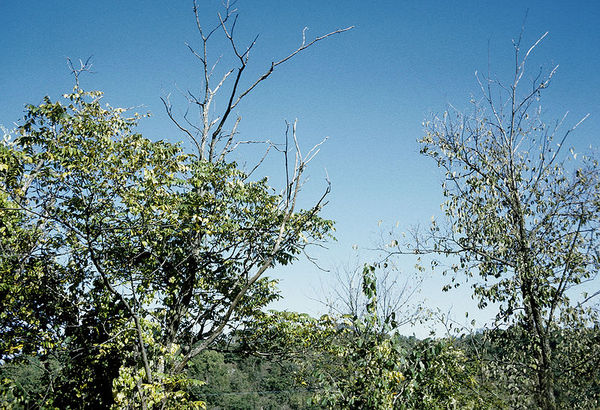 Butternut was used in the past as a laxative, to clean out the digestive tract. Apparently it was pretty efficient for those that suffered from constipation.

1854; King J;(Materia Medica) – JUGLANS CINEREA – Butternut
Properties and Uses. - Butternut is a pleasant and mild cathartic, operating without pains, irritation, or subsequent debility of the alimentary canal, somewhat of the cathartic character of rhubarb, but without inducing constipation after its action. It is especially adapted to cases of habitual constipation, dysentery, and other affections of the bowels. It is generally used in the form of an extract, in doses of from ten to thirty grains. A strong decoction of it is much employed in some sections of the country, as a domestic remedy in intermittent and remittent fevers, as well as in other diseases attended with congestion of the abdominal viscera; it is also reputed efficacious in murrain of cattle, and yellow-water in horses. The juice of the rind of the black walnut (Juglans Nigra) is said to remove ringworn and tetter; and a decoction has been used as a vermifuge. its bark is acrid
and styptic, seldom used except for tinctorial purposes. The European walnut ( Juglans Regia ) has recently been found by Professor Negrier, of Angers , in the highest degree efficacious in scrofula. He gave to children a teacupful of a strong infusion of the leaves, or six grains of the aqueous extract, or an equivalent dose of a syrup prepared from it two to four times a day; if there were ulcers or sore eyes, a strong decoction was applied to them, No injury was ever experienced from a long-continued use of the remedy.

It appears to act as a moderately aromatic bitter and astringent. The above American species would probably answer as good a purpose. Juglandin is the name of an agent just prepared from the J Cinerea, by Mr W. S. Merrell. It is of a jet-black color, brittle like starch, with the peculiar odor of the bark, and a bitter, somewhat pungent and aromatic taste, with a stimulant effect on the fauces. It is insoluble in water, but becomes soluble on addition of ammonia or liquor potassa; and the addition of acids to the solution precipitates the juglandin. Sulphate of iron added to water containing juglandin, darkens it. It is nearly soluble in ether. Muriatic acid turns a thin layer of it green; sulphuruc acid, reddish-black; and with nitric acid it effervesces, and becomes yellowish-red. So far as employed, this article has answered an admirable purpose as a laxative and cathartic, in doses of from one to five grains; and will, probably, prove an invaluable agent. It is prepared by adding a saturated tincture of the bark of butternut to twice its volume of water, and distilling off the alcohol; the juglandin is precipitated in the water, from which it must be removed and dried. Combined with Castile soap it operates more promptly.

1883: Scudder: (cathartic)
The inner bark of the root of juglans cinerea ‑ U.S. Preparations: A decoction of the bark. A tincture. A hydro‑alcoholic extract. Dose: Of a decoction, from 3ss. to 3j. Of the tincture, 3ss. to 3j. Of the extract, gr. v. to grs. xx.

Therapeutic Action: Juglans is a mild but pretty active cathartic, producing but little if any pain, and not debilitating the bowels. In this respect it resembles rhubarb. In combination with podophyllum or podophyllin it is very valuable in remittent and intermittent fevers, particularly in those cases attended with hepatic torpor and visceral congestion.

In small doses, combined with demulcents and aromatics, we find it useful in dysentery; it does not irritate, nor does it debilitate the bowels, but acts as a gentle laxative. In habitual constipation we know of no article superior to it. It operates kindly, restores the intestinal secretions, quickens the peristaltic action oft he bowels, and leaves them in a lax and soluble state longer than any article with which we are acquainted.

A strong decoction of the bark has long been used in some parts of the country as a popular remedy for intermittent fever. It is given during the intermission, so that the patient will be under its influence at the time for the next paroxysm. It is given in wineglassful doses, and, according to report, operates so briskly that if the patient wished to, he would not have time to shake. It forms an effectual cure, if reports are to be believed. The inner bark, scraped and moistened, and applied to the surface, acts as a vesicant. A syrup may be made by boiling the bark until a strong decoction is obtained, then adding loaf sugar, ginger, and one‑fourth as much brandy as there is of the liquid. This syrup is useful in dysentery, diarrhoea, bowel complaints of children, and in any case in which a mild and agreeable cathartic and laxative are required. The Juglans Nigra, or Black Walnut, is sometimes used for medicinal purposes. The rind of the unripe fruit is applied to ring‑worm and tetter, which it is said to remove, while the decoction has been used as a vermifuge. The Juglans Regia, or English Walnut, is also used.

The rind of the fruit is anthelmintic, and the expressed oil of the kernel laxative and destructive to the tape worm; while the expressed juice or extract of the leaves has been found highly efficacious in scrofula. It has, indeed, of late attained much celebrity in the treatment of scrofulous affections; and, from reports, it merits still further investigation.

1883: Scudder: (alterative)
“The leaves of the Walnut have been highly extolled of late by M. Negrier, as superior to all other antiScrofulous remedies. The extract of the leaves, which may be ranked in the class of slightly aromatic bitters, he found to be almost always efficacious in scrofulous affections, and in no case did it appear to exert any unpleasant action on the economy. Their efficacy in doubtless overated by him, and their main virtues would appear to be those of the aromatic bitter tonics.” The medical virtues of the bark indicate that the leaves may also be of service in the cure of disease. They merit a fair trial.

1892: Neiderkorn
In syphilis with excited circulation.

1898: Felter and Lloyd: JUGLANS (U.S.P.) – JUGLANS
Action, Medical Uses, and Dosage -Butternut in small doses is a mild stimulant to the intestinal tract, proving laxative and in larger doses is a gentle and agreeable cathartic, causing no griping, nor subsequent weakness of the intestines. It resembles rhubarb in its effect, but without inducing constipation after its action. It is very valuable in cases of habitual constipation, colorectitis, and several other intestinal diseases. It is generally used in the form of an extract, in doses of 1 to 30 grains. An excellent combination for chronic constipation is the following: R Ext. butternut, 3j; ext. nux vomica, grs. v. Mix. Ft. Pil . No. 40. Sig. Two pills, 3 times a day (Locke). The same pill is very efficient in deficient gastric secretion, in atonic dyspepsia, and in indigestion accompanied with gastric irritation, sour eructations, and flatulent distension of the stomach. Administer 1 pill a day. Juglans is useful in tenesmic, burning, fetid diarrhoea and dysentery, and should be remembered in intestinal dyspepsia with irritation. The specific juglans may be given in from 1 to 10-drop doses. The same doses of the same preparation act as an efficient alterative in chronic skin affections and scrofula, being particularly indicated in those skin affections exhibiting vesicles or pustules. Webster believes it effectual in all skin diseases except those presenting parasitic, scrofulous, or syphilitic manifestations. Juglans is an efficient cathartic to use when a free action of the bowels is demanded in rheumatism and chronic respiratory affections. A strong decoction of it is much employed in some sections of the country, as a domestic remedy in rheumatism affecting the muscles of the back, and in intermittent and remittent fevers, as well as in other diseases attended with congestion of the abdominal viscera; it is also reputed efficient in murrain of cattle, and yellow water in horses. It was used with great advantage in the treatment of dysentery and diarrhoea occurring among our soldiers in the Civil War. Dose of the extract, from 1 to 30 grains, usually from 1 to 5 grains; specific juglans, 1 to 20 drops, the smaller doses being preferred for its specific action.

1911: Fyfe
Intestinal diseases, with symptoms indicating irritability and a tendency to inflammation, chronic skin diseases, irritation of the mucous membranes. Dysentery and diarhea frequently present indications for this remedy. Juglans cinerea is tonic, alterative, diuretic, laxative, and cholagogue. In large doses it is cathartic and emetic. CALUMBA (U.S.P.) – CALUMBA