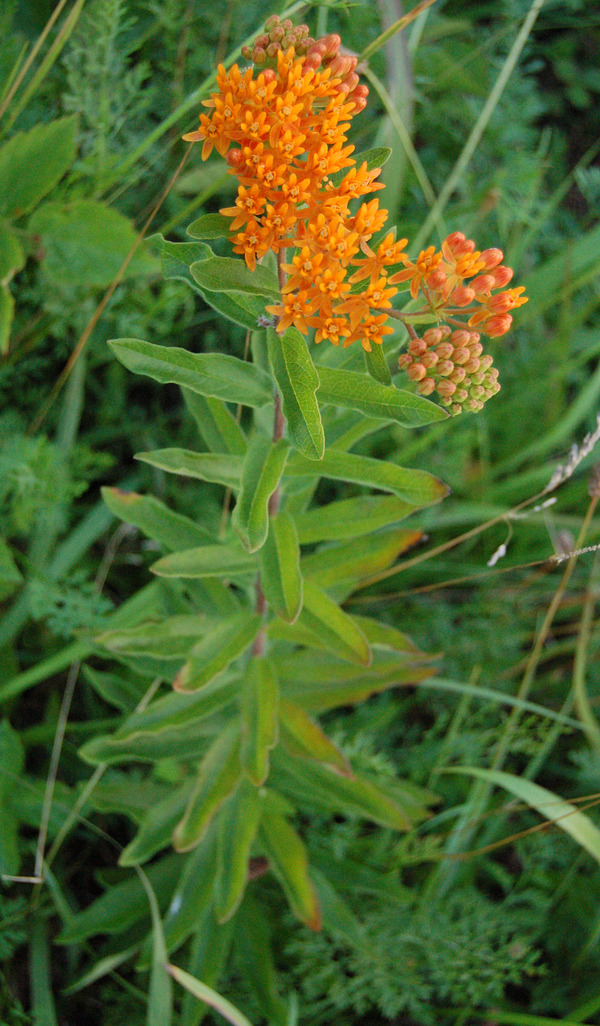 1874: Scudder
Preparation – Whilst I prefer a tincture made as above, I have used the alcoholic fluid extract of the dried root, made to represent ounce for ounce; the dose being from one drop for a child two yeard old, to ten drops for an adult.

It is expecially a child’s remedy, being feeble in action, thought quite certain. When given freely, it is one of the most certain diaphotetics we have, providing the pulse is not frequent, and the temperature increased. Even in the small doese of one drop, following the use of the special sedatives, it will markedly increase true secretion from the skin.
Recollect that there is a difference between sweating and secretion. There may be a profuse exudation of water, the surface being bathed in perspiration, and yet but little secretion. Excretion by the skin is a vital process, and takes place by means of secreting cells. It goes on best where the skin is soft and moist, and not when covered with drops of sweat.

I employ Asclepias in diseases of children, believing that it allays nervous irritability, is slightly sedative, and certainly increases secretion from the skin. I use it with Veratrum and Aconite, in febrile and inflammatory diseases, and in mild cases, very frequently give it alone. Bear in mind that it is a feeble remedy and too much must not be expected.

1898: Webster: (the muscles)
This agent has been highly extolled in some quarters for the treatment of rheumatism. Some have asserted that it rivals cimicifuga. I know nothing about the remedy from experience with it in such cases, but would suggest a trial of it in obstinate muscular pain.

Form for administration: A saturated tincture of the fresh plant.

Dose: From the fraction of a drop to twenty drops.

Asclepidin, or oleo-resin of asclepias, is a dark, semi-liquid mass, and is prepared by evaporation or distillation of the saturated tincture in water, similar to the plan pursued for obtaining resin of cimicifuga. It was formerly used for all purposes to which the crude article is applied, in doses of from 1 to 5 grains, 3 or 4 times a day, or as indicated.

Specific Indications and Uses - The specific indications for asclepias, according to Dr. J. M. Scudder are: “Pulse strong, vibratile; skin moist, pain acute, and seemingly dependent on motion.” The skin may be hot and dry or inclined to moisture; the urine is scanty; the face flushed; vascular excitement is marked in the parts supplied by the bronchial arterioles; inflammation or serous tissues; gastro-intestinal, catarrhal troubles due to recent colds.

Physiological Action – In regard to the influence of asclepias, Grover Coe, M. D., writing in 1858, gives the following wide range of action. He says: “No other remedy with which we are acquainted is so universally admissable in the treatment of disease, either alone or in combination. In fact we think of no pathological condition that would be aggravated by its employment. It expels wind, relieves pain, relaxes spasm, induces and promotes perspiration, equalizes the circulation, harmonizes the action of the nervous system, and accomplishes its work without excitement; neither increasing the forse or frequency of the pulse, nor raising the temperature of the body. It is of special service in the treatment of affections involving the serous membranes, as pleuritis, peritonitis, etc.” In this it resembles bryonia closely.

The most active apparent influence of this agent is upon the sudoriparous glands. it is distinctively an eliminative agent of general utility. it is mild in its influence, but if given with confidence it will produce good results.

Specific Symptomatology – Its first direct effect is upon the serous membranes within the thorax. it is specific in pleuritic pains, both of the acute and subacute variety, in doses of fifteen drops every two or three hours. For these I have long prescribed this agent with positiveness, and have yet to be disappointed. If effusion be present, its rapid removal is facilitated. The pain and distress abate, the cough disappears, the respiration becomes free and natural, the inspiration being especially pleasant; the heart takes on increased tone, and the entire contents of the thoracic cavity seemed benefited. I have treated with this remedy the “stitch in the side,” which had been present for many months after pleurisy, and have removed it satisfactorily.
This agent will cure pains in the chest unaccompanied by prominent symptoms, acute, sharp and cutting, recurrent or persistent in their character, if given in doses of half a dram every two or three hours and persisted in for a few days.

It was in great repute among the older Eclectiv physicians in the treatment of acute pleuritis, as suggested above. They also used it in acute inflammations of serous membranes, especially if there were acute, quick pains, and a tendency to serous effusion. Its eliminative action upon the skin greatly enhances its influence in these cases.
If the powdered asclepias be combined with ipecac and camphor, a powder is produced with diaphoretic properties of an Improved Dover’s Powder.
To obtain active diaphoresis, asclepias should be given in strong, hot infusion. Its influence in acute rheumatism should not be overlooked. It may be combined with such agents as macrotys and colchicum, and will markedly intensify their action, especially if aconite be indicated.