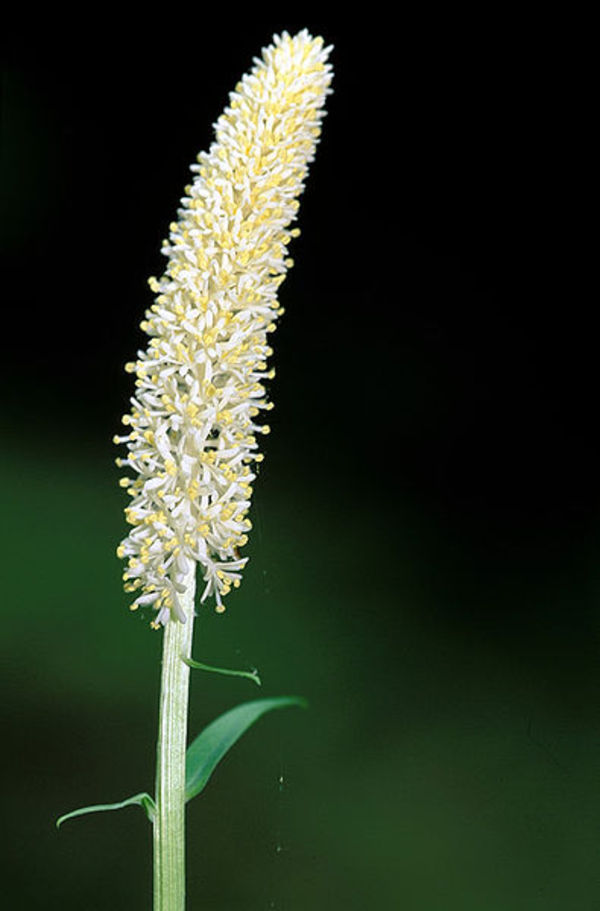 1854: John King
Properties and Uses – Helonias is a tonic, diuretic, and vermifuge; in large doses, emetic, and when fresh, sialagogue. In doses of ten or fifteen grains of the powdered root, repeated three or four times a day, it has been found very beneficial in dyspepsia, loss of appetite, and for the removal of worms. It is reputed beneficial in colic, and in atony of the generative organs. In uterine diseases it is held to be invaluable, acting as a uterine tonic, and gradually removing abnormal conditions, while at the same time it imparts tone and vigor to the reproductive organs. Hence, it is much used in leucorrhea, amenorrhea, dysmenorrhea, and to remove the tendency to repeated and successive miscarriages. The plant is said to kill cattle feeding on it; and the decoction to kill insects, bugs and lice.

Dose of the powder, from twenty to forty grains; of the decoction, from two to four or five grains. The Helonias Bullata, with purple flowers, and probably some other species, possesses similar medicinal virtues.

1873: J.M. Scudder
True Helonias undoubtedly exerts a marked influence upon the reproductive organs of the female, but as it is so frequently supplied from the Aletris, but little dependence can be placed upon it.

It exerts the general influence of a tonic, and a special tonic action upon the uterine and urinary organs. It is possible that if we can obtain a reliable preparation, it will be found superior to other remedies for these purposes. One of the special indications for its use in the mental depression and irritability that attends many of these affections. I am of the impression that, in many cases, the relief of these cerebral disturbances is its most important action.

Therapeutic Action – Helonias is tonic, stomachic, diaphoretic, and pectoral. It is used by many botanic physicians with decided advantage. It is adapted to atonic states of the system. It causes an improvement of the appetite, and promotes digestion. It is said to have been employed for the purpose of preventing abortions, for which it enjoys a high reputation.

It has been recommended in cases of chronic rheumatism, jaundice, strangury, etc.; also in cold, coughs, pectoral affections, and consumptive diseases, as a diaphoretic and expectorant.

1898: Webster
Helonias dioica improves the digestive and assimilative powers in appropriate cases, and may very properly be classed in this department, though its prominent place is among remedies influencing the female reproductive organs. Its best place as a remedy for indigestion and mal-assimilation is in those cases which are complicated with reproductive disturbances in women, though it is not to be discarded as a tonic to the digestive organs in the opposite sex.

In digestive disturbances the result of reflex action from uterine irritation it is often very useful, especially in chlorotic anaemia, where indigestion is attended by anorexia. It has also proven useful as a tonic after such debilitating disease as diphtheria.

In the nausea and vomiting of pregnancy it is a prime favorite with some practitioners, and it is a fine remedy here in many cases.

In the digestive disturbances apt to attend albuminuria it is also an appropriate remedy, and it possesses a reputed efficiency in the treatment of this disease independently of its action on the digestive functions – a specific action.

SPECIFIC HELONIAS -This is made of Helonias dioica and not from aletris. In commerce these drugs are confused to such an extent as to render the name inexpressive. Specific Helonias has a peculiar, honey-like odor when rubbed between the fingers, and when dropped into water renders it milky, owing to the separation of finely divided resin.

This agent is a general tonic, but has also a special affinity for the urinary and reproductive apparatus of the female. It is of some use in atonic digestive disorders, but its chief use will be found in the disease of women, characterised by mental irritability or depression. One marked symptom calling for it is a sensation of heaviness and fullness throughout the floor of the pelvis, a sensation as if the parts were congested and about to fall out. Use the small doses. It often relieves this bearing down sensation in dysmenorrhoea; dose, from one to ten drops.

Indications: A bearing down sensation throughout the floor of the pelvis; a feeling as it parts were about to fall out, consequently a tendency to hold up or support the extreme lower abdomen and its contents.

Use: In relaxed condition of the reproductive organs, especially of females, improving their functions and nutrition. A good blood maker and tonic to digestive apparatus. In cystic troubles in the male it is a good remedy if indicated. Also acts favorably in liver troubles where there is deficient or perverted action; but its action in this direction is only mild. Helonias is a general tonic to the genito-urinary organs. Valuable in phosphatic diathesis. In albuminuria where the liver is at fault it is highly recommended. Helonias should be associated with such other remedies as are indicated.

1909: Felter and Lloyd
History – This plant is indigenous to the United States , and is abundant in some of the western states, growing in woodlands, meadows, and moist situations, and flowering in June and July. It is also found in low grounds from Canada to Georgia and Louisiana .

The rhizome of this plant has long been confounded with, and sold for, that of Aletris farinosa, and to such an extent that druggists generally have concluded the two must bear a very close resemblance. This is a mistake, as there is scarcely any likeness between them. The impression as to their similarity of appearance was strengthened by the American Dispensatory, P.419, eighth and succeeding editions, viz.:

“There has been, and still exists, much difficulty among druggists and herb-gatherers, in determining the difference between the roots of Aletris farinosa and Helonias dioica, as they greatly resemble each other,” etc. With the view of correcting previous mistakes, and setting right the history of the two plants, we have produced fac-simile drawings of both plants (Figs. 14 an d66), and by a simple reference to our engravings of Aletris farinosa and a comparison with that of Chamaelirium, it will be obvious: (1) “That the shape of the leaves and general appearance of the plant are entirely different. (2) The rhizomae are utterly unlike, and do not in the least resemble each other.”

It is to be regretted that so much confusion has existed with regard to these rhizomae, and the difficulty must be ascribed to the common names given them, and not to a resemblance. We have upon the market, the rhizomae of Unicorn and False unicorn, of Stargrass and Starwort, Helonias dioica, and Aletris farinosa and the majority of dealers and therapeutists are by no means decided as to the identity of either of them. When ordered by their common names, the roots from one section of country will be the reverse of those from other sections; and when star-grass or unicorn root is sold to a druggist the dealer is uncertain as to whether it will not be returned as “different from that previously purchased.” Strict conformity to botanical names will assist in overcoming this extended and serious evil.

Action, Medical Uses, and Dosage – Helonias is tonic, diuretic, and vermifuge; in large doses, emetic, and when fresh, sialagogue. In doses of 10 or 15 grains of the powdered root, repeated 3 or 4 times a day, it has been found very beneficial in dyspepsia, loss of appetite, and for the removal of worms. It is more especially applicable in indigestion, dyspepsia, and mal-assimilation, where the trouble is reflex from, or associated with wrongs of the female reproductive apparatus. Such digestive disturbances as depend upon uterine and ovarian irritation, or upon lack of uterine activity, in chloretic anemia, are benefited by it, as well as the gastric complications of albuminuria. It is not, however, of much value in albuminuria itself. It is said to render the urine alkaline. It is reputed beneficial in colic, and is valuable in atony of the generative organs. I have found this plant to possess a decidedly beneficial influence in cases of sexual lassitude in both sexes, and of nocturnal emissions, the result of excesses, especially in those instances where there are symptoms of gastric derangement with impaired memory, mental apathy, or indifference, and an enfeebled condition of the general system, with weakness or dull pain in the renal, or lumbo-sacral region (King). In diseases of the reproductive organs of females, and especially of the uterus, it is one of our most valuable agents, acting as a uterine tonic, and gradually removing abnormal conditions, while at the same time it imparts tone and vigor to the reproductive organs.

Hence, it is much used in leucorrhoea, amenorrhoea, dysmenorrhoea, and to remove the tendency to repeated and successive miscarriages. A particular phase removed by it is the irritability and despondency that often attends uterine troubles. In painful menstruation it has been found especially adapted to those cases in which there is pelvic fullness, a sensation as if the womb and rectum were distended with blood, and the aching, bearing-down organs feel as it they would fall out of the body. Its action here is very decided when the smaller doses are employed. It is considered useful by some for the relief of the vomiting of pregnancy. Helonias is a decided tonic to the urinary tract, and has exerted some benefit in diabetes insipidus. The plant is said to kill cattle feeding on it; and the decoction to kill insects, bugs, and lice. Dose of the powder, from 20 to 40 grains; of the decoction, from 2 to 4 fluid ounces; of a saturated tincture, from 10 to 30 minims; of the hydro-alcoholic extract, from 2 to 4 or 5 grains; specific helonias, 1 to 20 drops. The Helonias bullata, with purple flowers, and probably some of the other species, possess similar medicinal virtues.

Owing to the confusion that once existed (compare Aletris and Chamaelirium) concerning the rhizomes furnishing helonias and aletris, the therapy of these drugs have been heretofore similarly given. Aletris, however, is most adapted to digestive disorders, while helonias is chiefly a uterine tonic.

Specific Indications and Uses – Mental irritability and despondency; sexual lassitude; atony of the female reproductive organs; gastric debility, with anorexia, nausea, indigestion, and mal-assimilation, particularly when due to reflexes of uterine origin; sticky, slimy leucorrhoea; atonic urinary tract; dysmenorrhoea, with pelvic fullness and heaviness, as if congested, with a bearing-down sensation, as if the parts were about to fall out.

The most marked effect, or special action, of helonias is on the uterus, and it is a remedy of curative power in all abnormal conditions caused by loss of tone in that organ.

In sterility from uterine atony it is without doubt the most efficient remedy known. It many times prevents miscarriage though its tonic action on the uterus and the general system. The general health is improved by its use, as a result of its influence on the digestive organs, increasing digestion and promoting assimilation.

Helonias dioica is tonic, alterative, diuretic, vermifuge and emmenagogue. In large doses it is emetic.