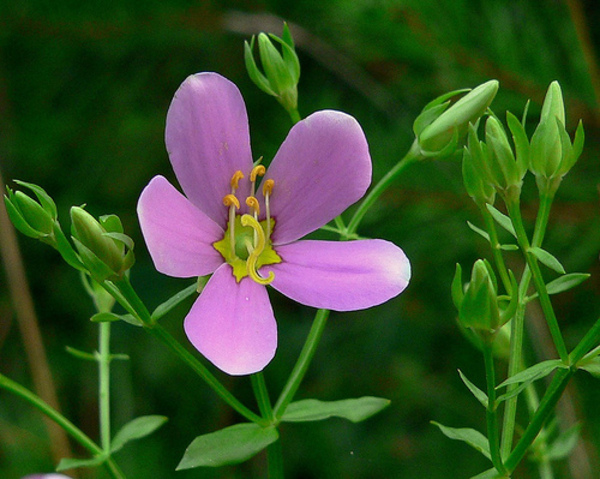 Sabbatia is a very interesting remedy dating back to the Eclectic Physicians. It was used to prevent infectious disease, in specific, malaria and dysentery. It was also used to stimulate the body to heal itself. This one is way forgotten, but, considering its history, is one that should be researched for contemporary uses.

The Sabbatia has had a considerable reputation as a prophylactic against periodic diseases, and in their treatment – it would be well to thoroughly investigate this action. As a bitter tonic, it may be successfully employed in atonic states of the intestinal canal with increased mucous secretion. Probably it will prove useful in all diseases of mucous membranes, where there is profuse secretion. It has been but little used of late, but it deserves study.

Dose – From five drops to half a drachm.

Therapeutic Action – The American Centaury is tonic, stomachic, authelmintic and diaphoretic. It is possessed of the properties of the simple bitters, and as such is frequently used in dyspepsia, the convalescent forms of fever, and in all cases of general debility.

1898: Felter and Lloyd – SABBATIA – AMERICAN CENTAURY
Action, Medical Uses, and Dosage – Tonic. Used in autumn periodic febrile diseases, both as a preventive and as a remedy. It is also serviceable as a bitter tonic in dyspepsia, and convalescence from fevers. When administered in warm infusion, it is a domestic remedy for worms, and to restore the menstrual secretion. Dose of the powder, from 1/2 to 1 drachm; of the cold infusion, 4 fluid ounces, every 2 or 3 hours; of the tincture, 1 to 2 fluid drachms; and of the extract, from 2 to 6 grains.

1911: Fyfe
Atonic conditions of the alimentary canal, especially when characterized by increased mucous secretion;periodic febrile disease. This agent is a good prophylactic remedy in autumnal intermittent and remittent fevers. Sabbatia angularis is tonic and anti-periodic.