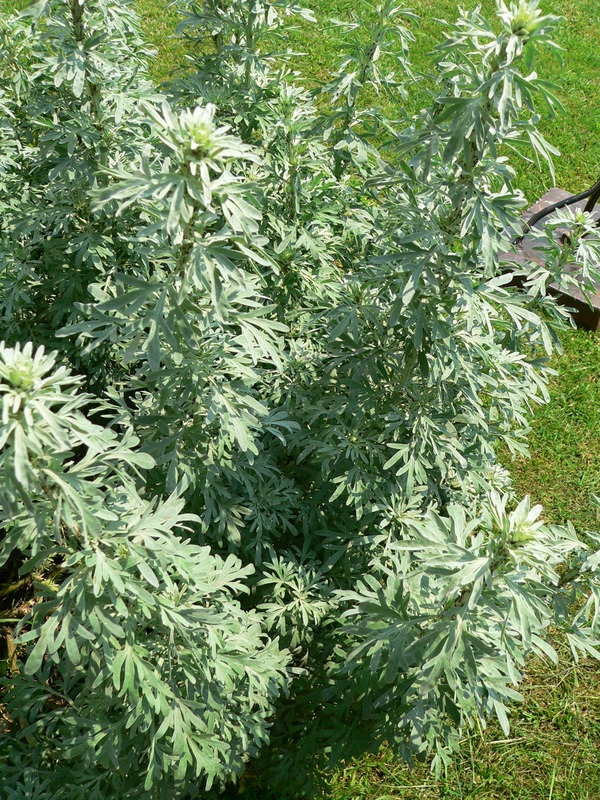 1854: JOHN KING
Properties and Uses - Anthelmintic, tonic and narcotic. Used in intermittent fever, jaundice and worms. It is also used topromote the appetite in atonic dyspepsia, amenorrhea, chronic leucorrhea, obstinate diarrhea, etc. Combined with a fixed alkaline salt, it proves powerfully diuretic. Externally it is very useful in fomentations for bruises and local inflammations, and has also been advised as an external application in chronic affectins of the abdominal viscera, either in the form of tincture, infusion, or poultice. In large doses, wormwood produces gastric irritation, and excitement of the circulation. Dose of the powder, ten to twenty grains; infusion, one to two ounces.

The Artemisia Abrotanum (southernwood) A. Santonica, and A. Vulgaris (mugwort) possess similar properties. The A. Vulgaris has been reputed beneficial in epilepsy, hysteria and amenorrhea. Santonin, or Santonicin, is a peculiar white crystallizable principle, derived from the A. Santonica, and some other species; it is soluble in ether and alcohol, and is very efficacious as a vermifuge, given in doses of three or four grains, twice day. The high price of santonin and the difficulty experienced in obtaining it pure, has induced M. Gaffard to endeavour to obtain from the wormseed a product which may possess the advantages of the former, and at the same time be free from the objections to the use of the latter. This product he call Brown or Impure Santonin; it is obtained as follows; Take of Aleppo wormseed three ounces; carbonate of potassa one ounce; slaked lime, sifted, half an ounce; water from three to three and half pints. Place the mixture on the fire, stirring occasionally with a wooden spatula; let it boil for half an hour; on removing it from the fire, pass it with expression through a linen cloth; let it settle, decant and add hydrochloric or nitric acid until it reddens litmus without being sensibly acid to the tongue. Allow it to rest, pass it through a filter previously moistened, or through a piece of close canvas, and allow the product which remains on the filter to dry in the open air, until it acquires the consistence of firm butter. This product, which is a mixture of santonin, resin, and essential oil, will answer for the various pharmaceutic forms in which the practitioner may wish to exhibit it. M.G. gives it in the form of lozenges, composed as follows: Place in a marble mortar, brown santonin three drachms; add by degrees, and with constant trituration, powdered sugar thirteen ounces, mixed with powdered gum one ounce and a half, and oil of lemon twenty-five drops, so as to make a homogeneous powder. Form with a sufficient quantity of water a mass of the desired consistence, and divide into lozenges, each of which shall weigh, when dried, fifteen grains; each lozenge will then contain somewhat more than one-third of a grain of brown santonin. For infants under six months, the dose is one lozenge night and morning; from six months to a year, two lozenges; from one to two years, three lozenges; from two to four years, four, night and morning; for those older, an extra lozenge for each year, to be given night and morning, and continued until the desired effects are produces, in every instance.

M. Lecocq obtains santonin by taking one part of semen-contra of Aleppo reduced to coarse powder, and boiling it for a quarter of an hour with ten parts of water, after which a sufficient quantity of slaked lime is added to render the liquor slightly alkaline; it is again boiled for ten minutes, then strained through a cloth, and the residue pressed. It it is not considered sufficiently exhausted, which may be ascertained by its leaving in the mouth the hot and pungent taste of semen-contra, it is boiled again with five quarts of water and a little slake lime; it is then strained and the residue submitted to pressure. The united liquors are evaporated until they donot weigh more than the semen-contra employed; they are then placed into a stone-ware pot, allowed to cool, and then treated with an excess of hydrochloric acid. A fatty and resinous matter instantly separates, in thick flakes, which float, and santonin is precipitated as an impalpable powder; it is strained through a fine cloth; the santonin passes with the liquor, and the resinous matters remain on the cloth. This substance, which contains only very little santonin is rejected. After a day’s repose, the impure santonin is deposited at the bottom of the vessel. It is washed and distilled water, and purified by combining it anew with lime. For that purposed, it is put into a porcelain capsule, with about two quarts of distilled water, and boiled. A certain quantity (50 to 60 grammes) of pulverised quicklime is then added to it, and the combination is effected in a short time. The liquor is filtered and decolorised with animal charcoal, and then treated with hydrochloric acid, which immediately precipitates the santonin; collect this on a paper filter, and wash it with distilled water until the washing water does not redden litmus paper, and dry in a stove secured from the light. Thus obtained, santonin occurs in pearly-white bracteae, of great brilliancy, and promptly becomes colored by light; it is therefore essential to keep it in a black glass flask and well corked.

It is important for the success of the above operation not to add an excess of lime in combining the impure santonin with this base, for the bibasic salt of santonin is very sparingly soluble in water; it is better to leave a slight excess of santonin; which will remain on the filter and which may be tre ated anew with lime.

1874: J.M. Scudder
Preparation - For experiment, I would suggest a tincture with dilute Alcohol, 76degree, in the proportion of 3viij. to the pint; vary the doese from one drop to one drachm.
This agent has been used principally as a vermifuge, but lately it has given place to the Chenopodium, and to Santonine. It possesses very decided medicinal properties, however, and deserves a thorough examination. It influences the nervous system, especially the sympathetic.

1909: Felter and Lloyd
History - Wormwood is distributed throughout various parts of Europe (being plentiful in the Crimea), Siberia , and the highlands and mountainous district of Barbary. It is found also in Newfoundland and the United States , being naturalized throughout the mountainous elevations of the New England States. It is cultivated in gardens both in this country and on the continent. In Germany it is employed as a substitute for hops in the making of Wermuth beer, and used by the French in preparing the liquor absinthe, an alcoholic cordial containing the oil of wormwood and other aromatics, as melissa, anise, marjoram and angelica, in the form either of oils or extracts. The plant should be gathered during its flowering period, which is from June to September, the best time probably being throughout July and August. The woody stalks should be rejected. The dried herb fully retains its virtues, which are imparted to both alcohol and water. Wormwood steeped in vinegar and water has long been popular among the laity as a local application for injuries.

Action, Medical Uses, and Dosage - Physiologically both oil of wormwood and extract of absinth act upon man as nerve depressants. Less than drachm doses produced in rabbits and dogs tremors, spasmodic muscular action of a clonic character, intoxication, and loss of sensibility. Larger doses (from 1 to 2 drachms) produced violent epileptoid seizures, in some instances resulting fatally. Small doses administered to man act as a gentle stimulant, larger doses produce headache, while still larger doses induce cerebral disturbances and clonic hysteroidal convulsions(Lancereaux). Victims of absinthism are subject to disturbed rest, with disagreeable dreams awakening in the morning with sickness and vomiting. A chronic intoxication ensues that is more fearful in its effects than that resulting from the abuse of alcoholics. A conspicuous feature is the tendency to epileptid attacks. Both physical and mental power is seriously impaired and the sexual system weakened to such an extent that virile power is lost in the male, while a premature menopause is a common result in the female. It is also said to produce a peculiar hyperaesthesia, most marked in the integument of the hypogastrium.
Absinthium possesses decided medicinal qualities, acting with considerable force upon the cerebrum and the sympathetic nervous system. It has been employed with success for the expulsion of the intestinal parasites – ascaris vermicularis and lumbricoides. Previous to the introduction of cinchonait was largely employed in malarial intermittents, and was at one time a popular remedy for jaundice. In small doses it is a stimulant tonic, improves the appetite, and is useful in atonic stages of the gastro-intestinal tract, as atonic dyspepsia, especially when due to alcoholic excesses, in flatulent colic, an din obstinate diarrhoea. Large doses are apt to irritate the stomach and increase the action of the heart and arteries.

It has been employed with good results in amenorrhoea and leucorrhoea when due to debility. It is principally used, however, as a warm fomentation for sprains, bruises and local inflammations. For this purpose it may be steeped in water, or better in vinegar and water, and applied as hot as can be borne. It has also been advised as an external application on chronic affections of the abdominal viscera, either in the form of tincture, infusion or poultice. Its tonic properties are marked. Combined with a fixed alkaline salt, it is said to prove powerfully diuretic. The oil is narcotic. Of the infusion (3i to Oj), 1 to 2 fluid ounces; of the oil, from 1 to 5 drops; the powder, 10 to 20 grains.

1874: Scudder
We only wish to consider the crystallizable principle – Santonine – here. Its principal use has been as a vermifuge in cases of ascaris lumbricoides, for which it has been found quite efficient. But in using it for this purpose many have noticed that it exerted a peculiar influence upon the brain, and upon the eyes – rendering objects blue, yellow, or green; and that is passed off in the urine, giving it a peculiar color.

It exerts a specific action upon the bladder and urethra, stimulating contraction of the first, and allaying irritation of the second. It is especially valuable in cases of retention of the urine in children during protracted disease; in does of half to one grain, it is prompt and certain. I have also employed it to relieve irritation of the urethra, especially in women suffering from uterine disease, and with good success.
Its influence upon the nervous system needs to be studied. I judge it to be a nerve stimulant, and have employed it for this purpose to a limited extent.