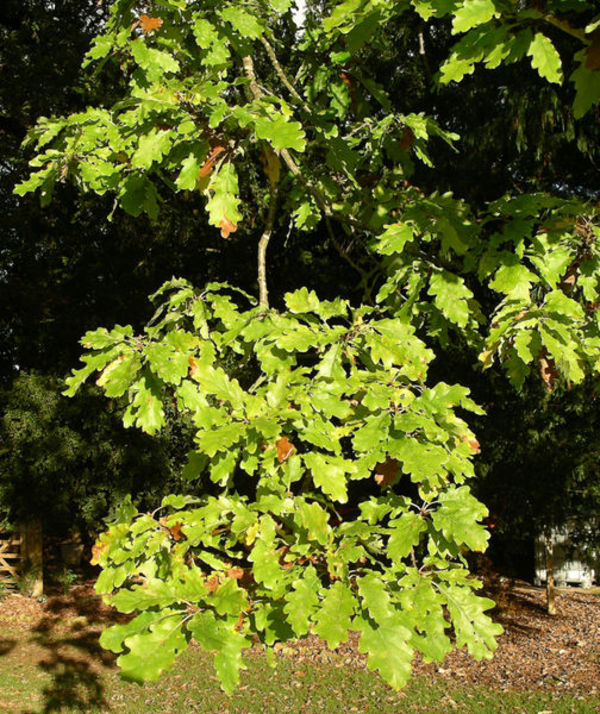 White oak, like all oaks, is rich in tannins.These tannins can be used to stop bleeding as they bind the blood vessels shut. But, the American colonial doctorsalso used it to cause healing in wounds and sores that were not healing on their own.

1854. John King. Materia Medica. – QUERCUS ALBA
Properties and Uses. – Oak bark is somewhat tonic, powerfully astringent, and antiseptic. Used with advantage in intermittent fever, obstinate chronic diarrhea, chronic mucous discharges, and in certain forms of passive hemorrhages; likewise in phthisis, and diseases attended with great prostration, coliquative sweats, etc. In such cases, a decoction of it may be combined with lime-water. Externally, a decoction forms an excellent gargle for relaxed uvula and sore-throat, a good stimulating astringent lotion for ulcers with spongy granulations, and an astringent injection for leucorrhea, prolapsus ani, hemorrhoids, etc. A poultice of the ground bark has often proved of service in gangrene and mortification. In sickly, debilitated children, and in severe diarrheas, especially when the result of fevers, the decoction given internally, and used as a bath to the body and limbs two or three times a day, will be found very efficacious. When given for diarrhea or dysentery, it should be combined with aromatics, and sometiems with castor oil. A bath is often advantageous in some cutaneous diseases. The green bark of elder and white oak, bruised together, or in strong decoction, forms a very useful and valuable application to abrasions. Dose of the decoction, one or two fluidounces; of the extract, from five to twenty grains. A coffee made from roasted acorns, has been highly recommended in the treatment of scrofula.

1874: Scudder
Quercus rubra: The red oak is not only astringent from its tannic acid, but it possesses other properties that will render it useful in some cases. Among them is its tonic influence, but its action upon the skin and kidneys. I have used it in chronic eczema associated with rumex, both as a local and internal remedy with marked advantage. A combination of quercus rubra, rumex, an alnus is my favorite remedy in obstinate cases of scrofula where there are old ulcers, feeble tissues, and cicatrices. I htese cases I use it as a local application and as an internal remedy.

I have employed it principally in infusion and decoction, but for experiment would recomend the preparation of a tincute 35viij.of the fresh inner bark to alcohol 76%Oj. Dose from gtts.to 3ss.

1883: Scudder
Quercus alba, rubra, tinctoria, etc. Oak bark is astringent and antiseptic. The barks of different species are similar in their medicinal properties, and the bark of one species is often used indiscriminately for that of the others;those named above however, are most frequently employed.

It is mostly used as an internal agent in passive hemorrhages, chronic diarrhea in which there is great relaxation of the intestinal exhalants,an atonic state of the alimentary canal, and in chronic dysentery and ulceration of the mucous membrane of the bowels.

1898: Felter and Lloyd – QUERCUS ALBA (U.S.P.) – WHITE OAK
Action, Medical Uses, and Dosage – Oak bark is slightly tonic, powerfully astringent, and antiseptic. It is useful internally in chronic diarrhoea, chronic mucous discharges, passive hemorrhages, and wherever an internal astringent is requird. In colliquative sweats, the decoction is usually combined with lime-water. It is, however, more generally used in decoction, as an external agent, which forms an excellent gargle for relaxed vulva and sore throat, a good stimulating astringent lotion for ulcers with spongy granulations, and an astringent injection for leucorrhoea, prolapsus ani, hemorrhoids, etc. The ground bark, made into a poultice, has proved useful in gangrenous or mortified conditions. In sickly, debilitated children, and in severe diarrhoeas, especially when the result of revers, the decoction, given internally, and used as a bath to the body and limbs, 2 or 3 times a day, will be found very efficient. When given for diarrhoea or dysentery, it should be combined with aromatics, and sometimes with castor oil. A bath is often advantageous in some cutaneous diseases. The green bark of elder and white oak bruised together, or in strong decoction, forms a very useful and valuable application to abrasions. Dose of the decoction, 1 to 2 fluid ounces; of the extract, from 5 to 20 grains. A coffee made from roasted acorns, has been highly recommended in the treatment of scrofula.

1911: Fyfe
Acute and chronic diarrhea,profuse night sweats, relaxed mucous membranes with profuse discharges;passive hemorrhages, relaxed uvula, bleeding hemorrhoids, leucorrhea, menorrhagia, and hemoptysis. This agent has proved curative in many cases of epidemic dysentery after the failure of many other approved remedies. Quercus alba is tonic, astringent, and antiseptic.

1911: LLOYD:
The bark of the oak, Quercus alba, is strongly astringent and has ever been used in domestic medicine where an astringent material is applicable, as for example, in dysentry, hemorrhages, etc. In the form of a poultice, a decoction, and as a tincture it has a domestic record, probably in common with other species of oak in all countries. The medical profession has added little, if anything, to the domestic uses of the drug, as recorded by Rafinesque (535), Porcher (520), Cutler (178), and the early American dispensatories and works on materia medica.