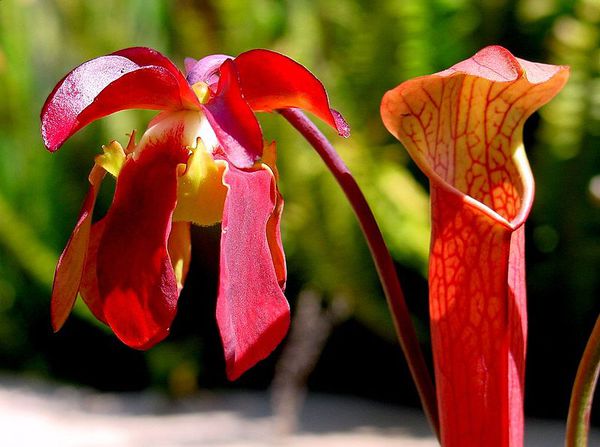 Pitcher plant was used in the last century to activate all the systems of excretion, liver and kidneys included. It was also said to stimulate the sweat glands which in turn resulted in toxins being eliminated from the skin. So, it might be called the body cleaner outer. The plant is rare in the wild so using it as medicine is not politically correct! An interesting read, but, like ivory, not very nice to buy.

Notes from the Eclectic Physician’s

They experiments of Dr.Porcher, of south carolina , showed that it exerted a marked influence on the sympathetic. From a large dose there was congesion of the head, with irregulairty of the hearts aciton, lasting several days. Following this first effect, the general vigor of the digestive apparatus unusually active. It is claimed that it has been succcessfully employed in chlorosis, and other diseases of a similar character.

It was introduced to the notice of the profession by DR.W.Morris of Halifax, in 1861, as an antidote to the virus of smallpox. He made the following statements in a lettre to the AMerican Medical Times:

“Sir, you have by this time, in all probability, heard something of an extraordinary discovery for the cure of smallpox, by the use of Sarracenia purpurea, or Indian cup, a native plant of Nova Scotia . I would beg of you, however, to give full publicity to the astonishing fact, that this same humbel bog plant of nova scotia is the remedy for small pox, in al its forms, in twelve hours after the pateint has teken the medicicine. It is also as curious as it is woonderful that, however alarming and numerous the eruptians, or confluent and frightful they may be, the peculair action of the medicine is such that very seldom is a scar left to tell the story of the disease. I will not enter upon a physiological analysis now; it will be sufficient for my purposes to state, that it cures the disease as no other medicine does, not by stimulating functional re-agency, but by actual contact with the virus in the blood, rendering it inert and harmless; and this I gather from the fact that if either the vaccine or variolous matter be washed with the infusion of the sarracenia, they are deprived of their contagious properties. The medicine, at the same time, is so mild to the taste, that it may be mixed largely with tea or coffee, as I have done, and given to connoissures in these beverages to drink, without their being aware of the admixture. Strange, however, to say, it is scarcely two years since science and the medical world were utterly ignorant of this green boon of Providence; and it would be dishonorable in me not to acknowledge that had it not been for the discretion of Mr.John Thomas Lane, of Lanespark, County Tipperary, Ireland, late of her majesty’s imperial custom of Nova Scotia, to whom the Mec-Mec Indiands had given the plant, the world would not now be in possession of the secret. No medical man before me had ever put this medicine upon trial, but in 1861, when the whole Province of Nova Scotia was in a panic, and patients were dying at the rate of twelve and a half percent, from may to august, Mr.Lane, in the month of may, placed the Sarracenia in my hands to decid upon its merits; and, atre my trials then and since, I have been convinced of its astonishing efficacy. The only functional influence it seems t have , is in promoting the flow of urine, which soon becomes limpid and abundant, and this is woign perhaps to the defecated poison or changed cirus of the disease exclusivvely escaping through that channel. The sarracenia, I have reason to believe a poweful antidote for all contagious diseases, lepra, mealses, varicella, plague, contagious typhus, and even syphilis, aslo a remdy in jaundice. I am strongly inclined to thik it will one day play an important part in all these.”

This report was confirmed by Dr.Herbert Miles, of the British Army, and Captain Hardy of the Royal Artillery. The evidence in its favor from physicians and residents of Nova Scotia would seem to be complete, that the Sarracenia has a direct prophalactic influence, and a direct and prompt curative action whrn the disease is developed.

The remedy, however, has been thoroughly tried by a number of physicians in the United States , and by physicians in private practice, and in the hospitals in England , with the report that if not entirely inert, it has no such antidotal power as has been ascribed to it. The evidence against it is just as positive as that in its favor.

Ahat conclusion can we come to then? The only way we can reconcile these opposing statements is, that the same agent was not employed in both cases. In Nova Scotia , where the plant is abundant, we may suppose it was used fresh; in the United States and in England , it was dried and so old that it had lost its medical properties. I am confirmed in this opiion by my experience. Wishing to try this remedy, I obtained three samples, and neither of these possessed in the least degree the physical properties attributed to sarracenia. When fresh, it is bitter and astringent, leaving a somewhat pungent impression in the fauces. The specimens I obtained had no taste.

In order to give the remedy a fair trial, let us have it prepared from the fresh root, obtained at the proper season. If an antidote to smallpox, its value can not be over-estimated; if it only exerts the influence over the sympathetic first named, it will prove a valuable remedy.

1898: Felter and Lloyd – SARRACENIA – PITCHER PLANT
Action, Medical Uses, and Dosage – The therapeutical actions of sarracenia are not fully ascertained. It is supposed to be a stimulating tonic, diuretic, and laxative; in connection with Osmunda regalis and blue cohosh, it will for a valuable syrup for chlorosis, uterine derangements, dyspepsia, and other gastric difficulties. An infusion of the leaf has been found equally available with that of the root. The best mode of employing it is not well determined; though the powder may be given in doses of from 20 to 30 grains, 3 or 4 times a day; and the infusion or syrup, from 1 to 3 fluid ounces. Dr. orcher, of South Carolina , instituted some experiments upon himself, using the recent root. he found it to possess bitterness and astringency, and to produce diuresis, gastric excitation, moderate catharsis, and, at the same time, to cause an increase and irregularity in the heart’s action, and a feeling of congestion about the head. This was the result of 180 grains taken in 2 hours’ time.

The root is useful in all cases where there is a sluggish, or torpid condition of the stomach, the intestines, the liver, the kidneys, or the uterus, producing costiveness, dyspepsia, sick headache, amenorrhoea, dysmenorrhoea, and the various functional derangements which are so commonly to be met with. The plant has been extolled as a prophylactic in smallpox, and also to modify it and shorten its duration when present. Although many physicians have made statements to this effect, yet all are not agreed. We do not think the plant possesses any such curative property as has been attributed to it in this disease, and believe those who have written in its favor, have allowed themselves to be mistaken. The plant, however, undoubtedly possesses valuable properties, which render it well worthy attention in this as well as in other diseases (J. King). Dr. Scudder suggests a strong tincture of the fresh root (3viij to alcohol, 76 per cent, Oj) in doses of 1 to 20 drops.

1911: Fyfe
Sluggish or torpid conditions of the stomach,intestines, liver, kidneys, or uterus. Sarracenia purpurea is stimulant, tonic, diuretic, and laxative.

Physiological Action – The agent is laxative, stimulating the action of the intestinal glands and the liver and overcoming torpidity. It stimulates the kidneys, inducing an abundant flow of limpid urine. It is an active eliminating agent, exercising a special influence upon the glands of the skin.

Therapy – As a remedy in the treatment of zymotic disease this agent has been used with good results. It is given freely during the course of scarlet fever, measles and small-pox, and it is claimed that in every case it modifies the character of these diseases, shortens their course, and prevents sequelae. It has, as yet, no established place in therapeutics.