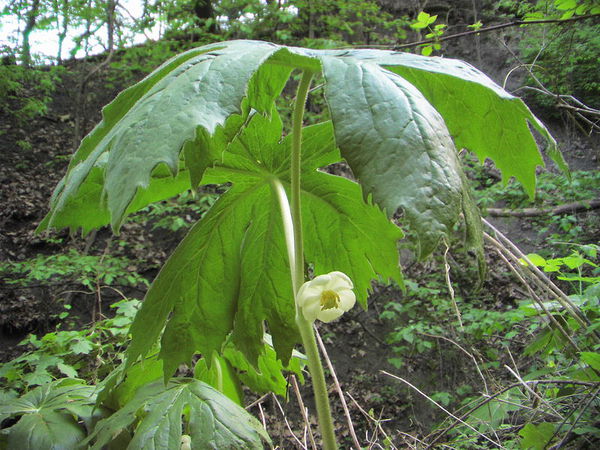 Another, not for the lay person herb, mayapple surfaced as one of the rising stars of stay well medicine in my PhD work. It worth reading about because it has such potential, and is such an interesting herb, but not one to be used!

1874: John M. Scudder.MD. Specific Medication and Specific Medicines. Revised. Fifth Edition.
For common use, prepare a tincture from the root in the proportion of 3viij. to Alcohol 76degree Oj. Dose gtt. j. to 3ss.

I am satisfied that a trial of a tincture of Podophyllum will satisfy any one that it is preferable to Podophyllin in general practice. It makes no difference whether it is to be used as a stimulant to the digestive tract, as an alternative, for its general cathartic effect, or as an emeto-cathartic.

For its stimulant influence and to improve digestion, I frequently use it in combination with the stomachic bitters, or Nux Vomica, Quinia, and Iron; necessarily the dose is small. As an alterative, a remedy to increase waste, it may be combined with other agents that act in the same direction, with the bitter tonics and restoratives, or many times with Veratrum. A common prestription of mine is: Rx Tincture of Veratrum, 3ss.; Tincture of Podophyllum, Tincture of Nux Vomica, aa

3j.; Water, 3iv. A teaspoonful every four hours. In place of water, the vehicle may be simple syrup or glycerine, a tincture of Mentha Viridis or of Amygdalus. The case in hand will suggest the best vehicle.

I am well satisfied that in small doses, associated with the bitter tonics and restoratives and good food, it is decidedly the best remedy we have in the treatment of old syphilitic lesions. Its action may be greatly aided sometimes by the use of the vapor-bath, or by sulphur and iodine baths.

For common use in malarial fevers, where the tongue is uniformly coated yellow, I would suggest its combination with Veratrum and Aconite, as in the following: R Tincture of Veratrum, gtts. xx.; Tincture of Aconite, gtts. x.; Tincture of Podophyllum, 3ss. to 3j.; Water, 3iv. A teaspoonful every hour.

For the ordinary routine of medicine, as a cathartic, combine it with neutralizing cordial, as R Tincture of Podophyllum, 3ij. to 3ss.; Compound Syrup of Rhubard, 3jss. A teaspoonful every two or three hours. The addition of a small portion of Tinctures of Lobelia or Ipecac will render its action more efficient and kindly. As an emeto-cathartic give it with a ginger-tea, or other stimulant taken freely.

Therapeutic Action: Podophyllum is cathartic and alterative, and exercises a specific action on the liver. It produces irritation and suppuration when continually applied to the skin, and irritation when applied to mucous membranes. Taken in small doses it acts slowly as a cathartic, producing but little if any nausea; but when administered in large doses it produces violent emeto‑catharsis. Though we have no well authenticated instances of death being produced by its administration, yet we have seen severe and long‑continued gastro‑intestinal irritation follow its injudicious use.

As a cathartic it is one of our most valuable indigenous remedies; and indeed one of the most important in the materia medica. It is a safe, certain, tolerable active deobstruent, and hydragogue cathartic, operating very efficiently though not so promptly as jalap (which in its action it resembles), and some other agents of this class; yet when it commences operating, its action is continued for a longer time. Considering the thoroughness of its action, it produces but little tormina; though in full doses it often operates as an emeto‑cathartic, causing great nausea, and protracted vomiting. It leaves the bowels in a lax or soluble condition for a long time.

During the early stages of many febrile diseases, particularly intermittent and bilious remittent fever, Podophyllum is an agent of superior efficacy. A single dose often arrests the severest attacks of fever. The nausea and vomiting, the depletion, its derivative powers, the general relaxation the active and protracted influence upon the bowels, together with its powerful action upon the glandular apparatus, particularly upon the liver and portal circle, render it an article of great importance in these cases. During the early stages of all fevers, and even after the disease is somewhat advanced, if there is not a state of prostration contra‑indicating the use of any active cathartic, this article will prove one of our most valuable curative agents. It is also valuable in most inflammatory diseases.

One of the principal sanitize uses of this agent arises from its protracted action, thus preventing a recurrence of subsequent exacerbation of the fever; another is its powerful derivative and deobstruent influence upon the system. In torpor or congestion of the liver, in jaundice, in any derangement of the hepatic functions, mercury, that Samson of the materia medica, dwindles into insignificance when compared with this simple and common plant. In chronic or mercurial rheumatism, in scrofula, in enlargements or indurations of the glandular system, and in torpor of any of the secretory organs of the body, the podophyllum, as an alterative discutient and revulsive cathartic, stand, we believe, altogether unrivaled in the list of remedial agents.

In syphilis, during its primary, secondary, or tertiary stages, as an excitant and alterative, as well as a cathartic or aperient, it is of unquestionable importance. In short, in all these chronic diseases, the podophyllum is so searching in its influence, leaving not a single organ, tissue, gland, or secreting surface untouched, as to command an enviable pre‑eminence, compared with other agents in common use.

The continued or occasional use of it, either as a cathartic or as an aperient, throughout the whole course of medication, is strongly recommended in the chronic diseases named, from the sanative influence secured by the administration of it, during many years, and in a large number of inveterate cases.

It is beneficial in cases of dyspepsia, especially when attended with a torpid state of the liver and bowels; it restores the secretion of the liver, and promotes intestinal secretion, and most effectually counteracts constipation. As a hydragogue cathartic, it proves highly antiphlogistic in synochal grades of fever, and in high grades of inflammatory action; and this influence is materially increased by combining it with the bitartrate of potash. The same combination is one of great utility in dropsy: One‑drachm of podophyllin combined with five drachms of bitartrate of potash, and given in drachm doses, and repeated five or six times per day, will produce profuse watery evacuation, and rapidly remove dropsical effusions. In those forms of dropsy arising from visceral obstruction the same combination will be found very useful as a deobstruent and hydragogue cathartic.

In amenorrhoea dependent on cold, or arising from torpor of the uterus, a single dose of this agent will often speedily restore the uterine secretion, even when the obstruction has continued for several months. It is recommended to be administered on going to bed, as it is less apt to produce nausea and unpleasant effects.

Specific Indication: Full tissues, full veins, full abdomen, full tongue dirty from base to tip, heavy headache, giddiness. Specific Uses: Following the indications as above, the reader can not go astray in the use of this remedy, whether he gives it in large or small doses. It does not make any difference what the name of the disease may be, or where it is located, if indicated, Podophyllum will aid the cure. I wish to call especial attention to the remedy in diseases of the brain, especially those marked by dizziness and weight in the head, and imperfect command of the muscles. In these cases it stands first among remedies, iodide of ammonium holding the second place.

In small dose, podophyllin is a stimulant to the sympathetic nervous system. Whilst its action is especially upon parts supplied from the solar plexus, it influences the respiratory nerves in a marked manner, and in a less degree the hypogastric. As a remedy in atonic dyspepsia, it holds a prominent place. I find in practice that the small dose is quite as good as the large one in the majority of cases. Even if I wished to influence the liver, I should give a single dose daily of podophyllin gr. 1‑20, hydrastia gr. 1/4, rather than the old‑fashioned dose. The same is the case in disease of the brain, and in many other cases. I usually carry the remedy in the form of small sugar‑coated pills, each containing podophyllin gr. 1‑20, hydrastia gr. 1/4. A second decimal trituration is an excellent form in which to administer the remedy, especially to children.

1905: J.S.Neiderkorn.MD. A Handy Reference Book. Published for the Author. Cincinnati .
Chronic skin affections where tissues and veins are full, constiptipon, inactive liver, dirty yellowish coating on tonguye from tip to base, heavy coating on base, dizziness, dose : from two to five or ten drops every three hours.

This agent increases the activity of the liver and upper intestines, influences the ductless glands in a curative directio, and flavors blood making.

1911: J.U.Lloyd. History of the Vegetable Drugs of the Pharmacopia of the United States . Bulletin number 18: pharmacy number 4.
This handsome plant, Podophyllum peltatum, known also as mandrake, or may apple, is one of the most attractive features of the early spring in North America , resisting with remarkable efficiency the aggressive inroads of the agriculturist. It was used by the North American Indians, the Cherokees employing the fresh juice of the root for deafness, and the Wyandottes made a drastic cathartic, from which the drug’s harsher qualities were removed by roasting. The once celebrated “Indian doctors”, Peter Smith (605) and others, employed the root as an escharotic, in which direction it came into early veterinary practice. The early American physicians and writers on medicine praised its qualities as a purgative, its active cathartic nature having been known, as has been said, from the days of the Indians. The vegetable substitute for the once popular antimonial plaster used to freely by “Regular” physicians was the Compound Tar Plaster of the Eclectics. This contained podophyllum, phytolacca, and sanguinaria.