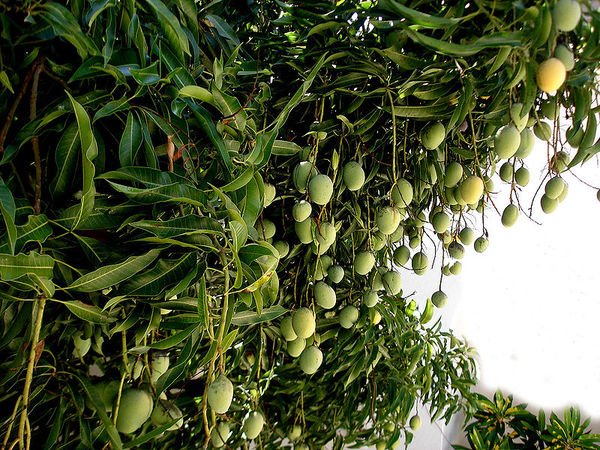 Mango was used as an immune stimulant to treat infection, which, as it turns out, was a smart use. Like all members of the poison ivy family, mango does activate the immune system and this does keep infections under control.

1911: FYFE
Passive haemorrhages from the uterus, bowels, or lungs, mucopurelent discharges from the bowels or uterus, profuse menstruation.

As a remedy in catarrh, leucorrhoea, gleet, diarrhoea, dysentery, vaginitis and urethritis, this agent has been used with curative results. In diphtheria it is said to have proved useful. Locally it is used as a spray, as an injection and as a gargle. Two drachms of the specific medicine or a good fluid extract added to four ounces of water constitutes a good gargle. In diseases of the throat it may be applied full strength, with a camel’s hair brush. Mangifera indica is astringent to mucous membrane, but it does not constipate the bowels.

1919: Ellingwood
Constituents – It contains a strong resin, tannin, and an acrid oil, sugar and citric acid.

Preparations – There is a fluid extract, the dose of which is from fifteen minims to one dram. Specific Mangifera is also prepared. Dose, from one to two minims.

Specific Symptomatology – Mangifera is especially adapted to atonic or greatly relaxed mucous membranes with profuse discharge from marked feebleness of the capillary circulation – very pale membranes with loss of tone; also when there is diarrhoea with large mucous discharges and dysentery with an excessive mucous or mucopurulent discharge. This dose need not exceed fifteen or twenty minims. It seems to have antiseptic properties which are advantageous in malaria in septic trouble. It has distinct tonic properties. It reduces the pain of dysmenorrhoea, controls leucorrhoea, reduces an exhaustive menstrual flow, and regulates this function. Prof. Howe gave it when there was developing tumour of the uterus, expecting to control the abnormal growth. It is useful also in irregular, passing haemorrhage.

Therapy – This agent has something of the same influence that any active tonic astringent would have combined with capsicum or other stimulant and an antiseptic. It seems to be a stimulating astringent tonic, correcting septic conditions. In malignant disease of the throat this author has been in the habit of using sulphurous acid, and Pinus canadensis, or quercus. This remedy takes the place of both to an extent. It should be applied tot he fauces, should be gargled, and also used internally. It will be found beneficial in ulceration of the mouth or other mucous surfaces. It has been for some time recommended in the treatment of nasal catarrh, and in vaginal leucorrhoea, in bronchial catarrh also. It is specific to diarrhoeas where there is a great degree of relaxation and lack of tone, and where a stimulating astringent is needed.

Dr. Harrison gives mangifera freely in diphtheria and tonsillitis, two drams in four ounces of water, a teaspoonful every half hour or hour, treating other indications with aconite, phytolacca, or jaborandi as required. He used it in post-partum haemorrhage also. He says that when the mucous membranes are red, tender, swollen, perhaps inflamed, and have a tendency to throw out a discharge, then this remedy does the best good. It is a mucous membrane remedy.

Dr. Lisk used this remedy in the treatment of hematemesis with much success.

In the uric acid diathesis, Dr. Rew gives mangifera in conjunction with sulphuric acid in small doses every two or three hours with good results.

Dr. Barnes of Illinois reports several cases of severe uterine haemorrhage both post-partum and during the menopause, cured with this remedy.

In syphilitic throat trouble, an advantage is gained by combining mangifera with thuja. In extreme cases, the ulceration should first be touched with persulphate of iron; then thuja and mangifera used both to the ulcerations, and internally.

Where there is mucopurulent discharge, either from the bowels or from the uterus, Dr. Linquist says he knows no agent equal to it. The dose is small, easily administered, has no disagreeable taste, it is acceptable to the stomach, and more certain in its influence than most of the better known astringents. In some cases where pain is present with these conditions named, the pain seems to be relieved by the remedy. It has relieved the excessive albumen present in some cervical ulceration, and excessive vaginal leucorrhoea, either of a specific or non-specific character, and will be productive of good results.