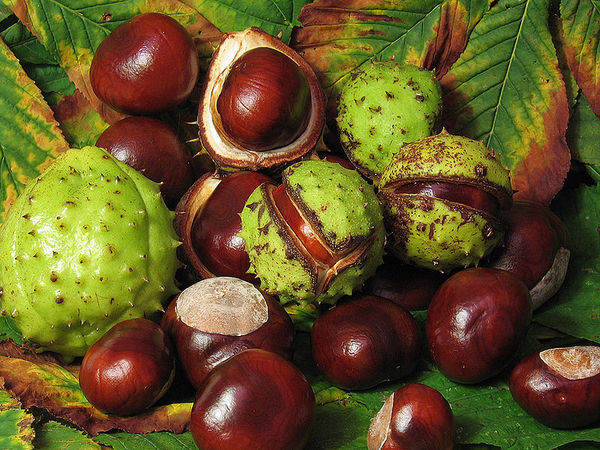 1854: JOHN KING – AESCULUS HIPPOCASTANUM – HORSE CHESTNUT
Properties and Uses – Horse-chestnut Bark is tonic, astringent, febrifuge, narcotic, and antiseptic. It has been found very efficacious in the treatment of intermittent fever, given in doses of from half an ounce to an ounce of the bark, in the course of twenty-four hours. It is inferior, however, to cinchona. Ten grains of the powder of the rind of the nuts, have been found equivalent in narcotic power, to three grains of opium. A strong decoction of the bark has been recommended as a lotion to gangrenous ulcers. The powdered kernel of the fruit produces sneezing, and has been used as a sternutatory in complaints of the head and eyes.

1874: Scudder
Take of the recent nut, fully ripe, four ounces, bruise it thoroughly, and cover with alcohol 76% one pint; let it stand fourteen days and filter.
Dose, two to four drops, in water.

The bark of this variety has been employed to a limited extent as a tonic, and possesses feeble antiperiodic powers. Quinine being employed to break the chill, this agent was sufficient to prevent its recurrence. THe pulverized kernel has been used as a sternutory for the relief of headhace and facial neuralgia. The nuts were also thoght to possess some special influcence over hemorrhoids and rheumatism.

The influence upon the nervous system is similar in kind to the buckey, though not so active. This probably will be its best fielf of action, standing midway between belladona on one hand and nux vomica on the other.

It exerts the same influence upon the circulation as the Aesculus glabra, and has been successfully employed in the treatment of hemorrhoids. It will doubtless be found to improve the circulation generally, and may be employed whenever there is want of power in the heart, capillary stasis, or tendency to congestion.

1895: Watkins
Headache, portal congestion, pain in back, hemorrhoids wiht a feeling of dryness and constriction in the rectum, hard and difficult stools, epigastric fullness, neuralgia of internal viscera. Ten drops to one half drachm in four ounces of water, teaspoonful every two hours.

1898: Webster(digestive)
This remedy spends its main influence on the circulation of the lower portion of the alimentary canal. Its best effects are manifested in congestive states of the hemorrhoidal vessels, and we may expect prompt beneficial results from it in the treatment of many cases of piles.

Dr. Richard Hughes writes as follows regarding the influence of this remedy on the rectum and anus (Manual of Pharmacodynamics)-
“The region most constantly and strongly affected by the horse-chestnut is that of the rectum and anus. No prover escaped its influence there; and beyond the many forms of distress experienced by others -dryness, fullness, constriction, sense as if a foreign body were there, heat, itching in two, one of whom had never had piles before, these morbid growths (?) were produced. Correspondingly, aesculus has acquired a high reputation in the homeopathic school as an antihemorrhoidal medicine. I have several times affirmed and illustrated its value; and Dr. Hale cites numerous testimonies of like import. The form of the disease in which I have found it specially efficient is that in which the only connected symptom or appreciable cause in constipation, and where there are much uneasiness and pain but little bleeding”.

Chronic throat trouble is often a concomitant of rectal irritation; and here this remedy will be found serviceable. It has even been recommended by some writers as a remedy for follicular pharyngo-laryngitis.

Hale (New Remedies)recommends this remedy in hepatic congestion, when accompanied by hemorrhoids, and suggested by aching, pinching pains in the right hypochondrium, which are aggravated by walking.

Dr. Hart (quoted by Hale) considers throbbing in the abdominal and pelvic cavities, especially the pelvic, a key note for its selection as a remedy. This allies aesculus to hypericum, somewhat, though the throbbing of the latter is general – all over the body and nervous system- while that of aesculus is probably a result of disturbance of the hemorrhoidal and portal blood vessels.

Dose-Add from ten to twenty drops to four ounces of water and order a teaspoonful four or five times a day.

1898: Felter and Lloyd: HIPPOCASTANUM – HORSE-CHESTNUT
Action, Medical Uses, and Dosage – Undoubtedly horse-chestnut acts upon the human system very much after the manner of buckeys (Aesculus glabra). By some, however, its power over the circulation is thought to be more pronounced, particularly its control over the portal vessels. The virtues formerly ascribed to the bark and nut are as follows: Horse-chestnut bark is tonic, astringent, febrifuge, narcotic, and antiseptic. In intermittent fever the bark has effected cures when given in doses of a teaspoonful 4 or 6 times a day. Ten grains of the powder of the rinds of the nuts have been asserted to be equivalent in narcotic power to three grains of opium. This claim, however, requires substantiation. Gangrenous and ill-conditioned ulcers have been benefited by a strong infusion of the bark. The whitish, central part of the nuts, when in powder, has been recommended as a sternutatory in some cases of ophthalmia and headache. The oil of horse-chestnuts is considered in Europe a valuable local application in neuralgic and rheumatic affections; it is made by exhausting the powdered horse-chestnut in ether, filtering and evaporating. Aesculin, in doses of from 5 to 30 grains, repeated 2 or 3 times a day, has proved beneficial in periodical febrile affections, and in neuralgia of the internal viscera. Of all the uses formerly made of hippocastanum, only the latter is recognized to-day, its power of controlling neuralgia of the viscera, and then only in cases of abdominal plethora. Specific medication has taught us that it is a remedy, not for active conditions, but for congestion and engorgement. It is indicated in general by capillary engorgement – a condition of stasis – with vascular fullness and sense of soreness, throbbing, and malaise all over the body. An uneasy, full, aching pain in the hepatic region is also an indication. Rectal disorders, such as rectal irritation and hemorrhoids, with marked congestion and a sense of constriction, as if closing spasmodically upon some foreign body, with itching, heat, pain, aching, or simple uneasiness, are fields in which hippocastanum exerts a specific influence. The pile-tumors are purple, large, do not bleed as a rule, but there is a sense of fullness, or spasm of the parts, and a free diarrhoea may be present. Not only does it relieve such rectal complaints, but cures disorders hinging upon them, such as rectal neuralgia, proctitis, etc., and the reflexes induced by them, proceeding from the rectal involvement. Among these reflex manifestations may be mentioned dyspnoea, asthmatic seizures, dizziness, headache, backache, and disturbed gastric functions amounting to veritable forms of dyspepsia. These conditions pass away when hippocastanum overcomes the rectal difficulties. Dose of specific horse-chestnut (prepared from the nut only), from 1/4 to 5 minims in water every 1 to 3 hours.