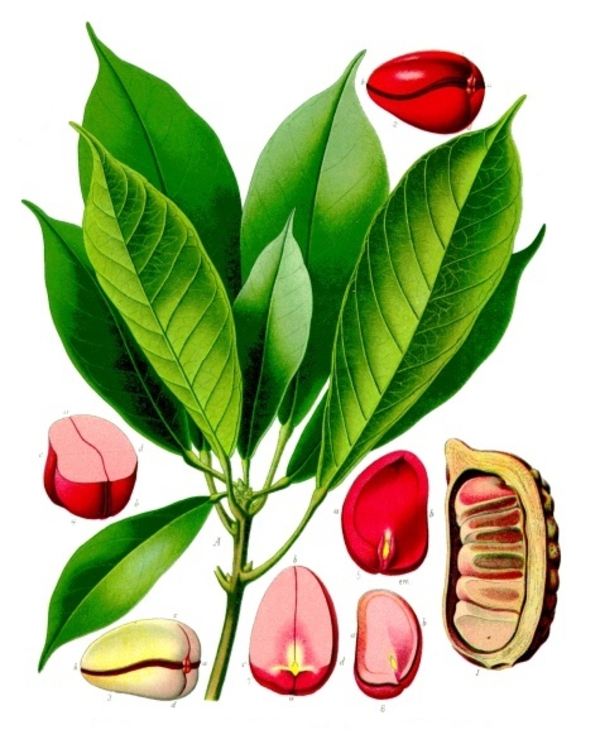 It is prepared by different manufacturers in the form of wines, cordials or elixirs. A solid extract is also prepared.

Physiological Action – The natives of the western portion of tropical Africa use the seeds of kola most extensively to overcome fatigue, to support the strength on long marches, and to overcome depression of spirits and melancholy. It is most highly esteemed and is in as common use as tea, coffee and cocoa in civilized countries, closely resembling the first two named.

The agent sustains physical strength to a remarkable degree. It is a tonic to the heart, increasing the strength of its impulse; it regulates the pulse, increases arterial tension, induces diuresis, but retards tissue metabolism. It is a stomachic tonic, inducing a normal appetite and good digestion. It restores normal action in debilitated conditions of the intestinal tract.

Therapy – It is used in neurasthenia and hysteria, characterized by great mental despondency, foreboding, brooding, more of a quiet or silent character. It is especially indicated if the heart is feeble and irregular in its action, with general muscular feebleness. In cerebral anaemia it is indicated and is an excellent auxiliary in general anaemia. It is an excellent restorative after prostrating fevers and protracted exhausting disease. it is of specific value in melancholia.

In weak and enfeebled conditions of the heart muscle, with valvular weakness, dyspnoea, irregular action, it is of benefit, the influence being quickly exhibited on the pulse, and an improved sense of well being experienced.

It is recommended as a substitute for alcoholic drinks, and has been used to most excellent advantage as a stimulant and restorative in the treatment of the drink habit. Those most enthusiastic claim that it alone will cure alcoholism.

It is advised in chronic diarrhoeas, with great lack of tone. It has been used in sea sickness, one ship surgeon claiming that he had used it on many voyages, and had found it to relieve even the most susceptible, in many cases. The agent is without doubt a valuable one in its field.