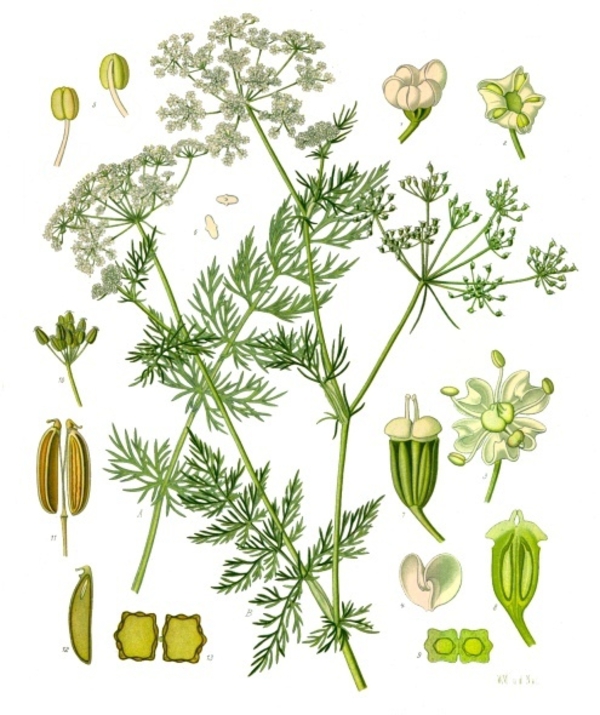 Whether or not having a prodigious amount of gas is a symptom of good or bad gastro-intestinal health is somewhat questionable. Most would agree it something you would rather not have particularly on your wedding day or if you have a long car trip planned with business associates. It is a natural phenomena and an entirely predictable part of digesting food. As the food atoms are split and converted into absorbable particles gas is released and it has to go somewhere, up or down, if it didn’t you would quite literally explode, and that wouldn’t be pretty. As much as we don’t like to have gas, particularly whilst giving a speech or riding in a crowded elevator, we all do. When you stop producing gas you are dead.

It is true that some people seem to produce more gas than others and in the case of these misbegots we herbalists keep a seed in the medicine cabinet to end their shame. The plant

in question is called caraway and its seed has been used since time immemorial to reduce this over production of gas.

Caraway is native to Europe, Asia, and North Africa , though the plant has been carried by the colonials to all parts of the globe.

It was well known to the ancient Arabian physicians and had made its it way across the English channel well before the 14th century. In German domestic medicine it was known as cummich and has mentions dating to the 13th century. Caraway gets its name from the town Caria located in Asia minor , the name became Carri in Italian, and then into the word we know it by in English. Though there no record to this effect it is likely that Caria once was a major production center for the herb.

“Karawaya” was a standard in the ancient Arab physicians medicine chest- particularly when it came to problem stomach’s. Julius Caesars troops are said to have ground the roots of the plant to make bread and dioscorides mentions the plant to be used in improving the complexion of young women. It seems it was hard to sell a daughter if she had blemishes and the seed was used to make the goods appealing to the customer.

On the Asian front caraway, or ajowan as its called there, grows wild in the region of Labul in the western Himalayas. The seed is widely used in Ayervedic medicine to treat the condition we are working with. A distilled water made from the seed, ajowan-ka-arrak, is sold in the markets for people that suffer from over production of gas. The Indians have found that caraway is extremely useful in treating people that suffer from nervousness. There is a link between being emotionally worked up and an attack of gas and if you suffer from nervous gas take note of the Indian use. The Ayervedics also use caraway to treat any other digestive problem, from cramps to poor digestion. The Indian list of uses for the seed of this plant includes anti-spasmodic, stimulant tonic, and carminative. Flatulence, flatulent colic, atonic dyspepsia, and diarrhea are all dosed with teas made of caraway seed. They state very specifically in their medical texts that caraway is ideal for people that have an irregular diet and suffer from gas. That would include most of us I would say. Though we are using it for gas specifically it is reported to be a digestive strengthener, a pleasant side effect of using this drug.

From the Middle Ages onwards in England caraway was used for the gas problem. Parkinson said, “The seed is much used to be put among baked fruit, or into cakes, etc, to give them relish. It is also made into comfits and taken for cold or wind in the body, which are also served to the table with fruit.” The old belief was that gas was caused by wind trapped in the body that had to be got out, one way or the other. The English felt that chewing a little caraway seed would help the trapped wind find freedom. There was a custom of serving caraway with foods that were traditional gas producing as in the case with apples. Shakespeare’s classic Henry the IV has Squire Shallow offering Falstaff a plate of apples and caraway seed. How thoughtful of the Squire.

In the British Isles caraway was even thought to have a number of magical powers! It was said to keep things from getting lost. A pen rubbed with caraway seed would never leave its owner, or so they thought. This was said to be equally true when rubbed on a spouse or pigeon, neither would end up in the wrong bed or roost after a rub down with the seed. If your gas comes from a spouse that tends to get lost and end up in the wrong bed habitually, caraway might correct your problem. Divorce might be a second idea if the caraway fails.

The Generations that came before us knew what they were doing. Foods known to create a lot of gas were always served with caraway to prevent the problem from getting out of hand. The Germans cook cabbage , a prime offender, with caraway seed to lessen the gas produced in the gut. The two groups famous for a cabbage heavy diet, the Russians and the Germans, both alike make a liqueur called Kummel to be served after a repast of sauerkraut. Bearing in mind how much cabbage is consumed in that corner of the planet this may be the best after dinner cocktail available.

A member of the highly medicine umbelliferae family, caraway along with its kissing cousins dill, anise, and fennel are all used to stop the over production of gas. Herbs used to reduce the production of gas are called carminatives and caraway is definitely a carminative. The part of caraway used in medicine is its seeds. The plant produces lots of them and all the gardener needs to do is let the plant grow unmolested and in July the seeds can be collected. A rather common seed, it can be found in the spice section of almost all grocery stores.

The seeds are rich in aromatic and medicine substances. If you take a handful of seeds and crush it in the palm of your hand you will smell all the aromatic oils present. The aromatic oil contains carvone, limonene, dihydrocarvone, carveol, dihydrocarveol, pinen, thujone,to name a few. Other chemical contained in the plant are flavanoids, polysacharides, proteins, and fixed oils. The seeds of this plant are just loaded with medicinal substances. The chemical content makes it an effective treatment for many illnesses – it’s also used as to sooth muscle spasms, clear the respiratory tract of congestion, regulate menstruation, increase the flow of milk in mothers, and last but not least kill nasty bacteria that cause illness. Its a very all purpose plant, but we will concentrate on its uses in the de-gassing department.

Gerard had this to say about caraway, ” The seeds, confected, or made with sugar into comfits, are very good for the stomacke, they help digestion, provoke urine, asswage and dissolve all windinesse” The seed wasteth and consumeth winde, and is good against belchings and upbraidings of the stomacke, allayeth gripings of the belly, and stirreth up bodily lust.” Not only will caraway take you gas away but it will get you all worked up for some matrimonial bliss. As you know there is nothing sexy about having gas.

On the scientific front caraway has been proven to have carminative, stomachic, anti-bacterial, anti-larvicidal, anti-spasmodic, and anti-histaminic properties in clinical trials. Commercially speaking caraway can be found in indigestion, constipation, and gas remedies. Additionally the little seeds are used to flavor drugs to mask nasty tasting chemicals, and to fragrance cosmetics, tooth paste, soaps, cremes, lotions, and perfumes. It is widely used in commercial food preparations and the American Food and Drug Administration has ruled it is “Generally Food Safe”. Though the FDA says it is food safe I’m sure thou would label it dangerous if they knew it was being used to treat gas.

For modern people with some trapped wind caraway is the best plant to be used to get rid of it. The seed is crushed and one teaspoon of broken seed is added to a cup of boiling water, the mixture is then allowd to steep for ten minutes and after straining drunk. You can use it in a preventative manner by having a cup before meals or after the fact after dinner or once you are already in trouble.

The only other advice an herbalist can give is that some foods make a person have gas more than others. This is highly individual. The entire cabbage family will cause gas and this includes radishes, broccoli, cauliflower, brussels sprouts, turnips, rutabagas, collards, cale, and mustard greens. Beans of course equally noted for getting the gales of wind whipping about. Once again, common sense should prevail, if something gives you gas and you dont like being known as the human oil rig, dont eat it.

Getting your supply:
1. Purchase the seed in the spice section of the grocery store.
2. Grow it yourself. This is one easy plant to get going in the garden, you dont even need to make a trip to the garden center or send away for some seeds. A can of caraway seeds from the spice rack at the grocery will be all you need to get a patch growing. Take a corner of the garden and turn the soil up and chop it well. Then add composted manure to the area in a one to one ratio. Mix the manure in well, well enough so that you cant see it in a distinct manner any more. With a pencil make one inch holes and drip three seeds into each hole. Space the holes about six inches apart. With the seeds in the holes, cover the holes, and water well. The time to do this is in the spring as soon as the soil can be worked. In about two weeks the seedlings will appear and if well watered, will grow into rich lush looking plants. The plant is biennial which means that it produces its seeds, the part we want to collect, in its second year. The plant will come up again in its second year with little to do, and later in the summer, will burst into bloom. The flowers will fade and the seeds will appear. Harvest the seed just as they are starting to turn brown and place the seed heads in a paper bag some where in the sun. The seed will finish ripening and dry out in the paper bag and you only have to separate the seeds from the apparatus that held them on the plant. Take a handful of seed and work them back into the garden spot you grow the caraway in, this will provide you with a crop next year.