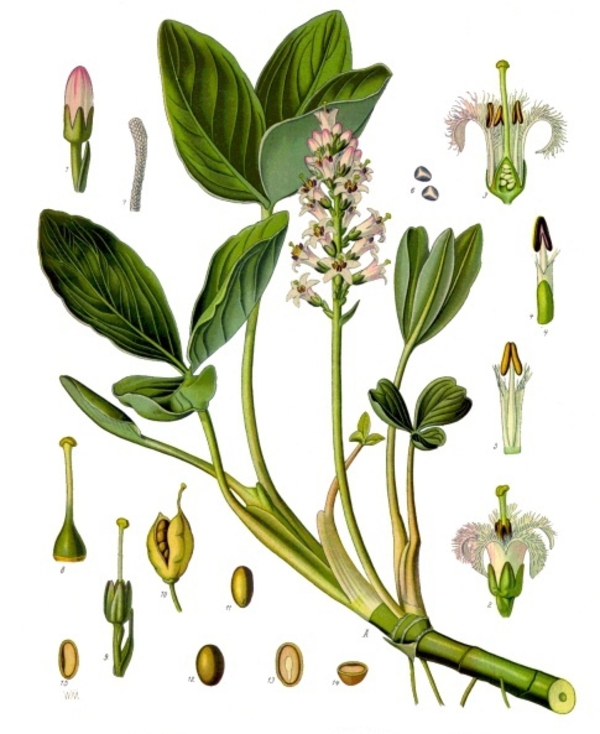 Bogbean is an Eclectic remedy used to stimulate health when vitality was on the decline. It was used in small doses because large doses caused vomiting. I guess you could say its so stimulating that it can over stimulate the gag reflex. Not really used anymore, this is an interesting plant with a long history. Its one that should be studied for its potential use in chronic disease.

1799: Lewis Materia Medica
Inveterate cutaneous diseases have been removed by an infusion of the leaves, drunk to the quantity of a pint a day, at proper intervals, and continued some weeks. Dr.Cullen has had frequent experience of their good effect in some of these hepatic and seemingly cancerous kinds. Boerhaave relates that he was relieved of the gout by drinking the juice mixed whey.

1830: Rafinesque
The whole plant is bitter, like gentian, but the root more intensely so.

1854. John King. Materia Medica. – MENYANTHES TRIFOLIATA
Properties and Uses – Buckbean is a tonic and astringent in small doses; in large ones cathartic, and sometimes emetic, especially when fresh. It has been given dyspepsia, intermittent and remittent fevers with

Advantage; and has been highly recommended in chronic rheumatism, hepatalgia, dropsy, worms, and some cutaneous diseases, and as a tonic in scrofula and various cachectic affections. Dose of the powdered leaves or root as a tonic, from twenty to thirty grains; of an infusion, prepared with half an ounce of the root to a pint of boiling water, from one to two fluidounces; of the extract five or ten grains, to be repeated three or four times a day. As a purgative, sixty grains of the powder, or a gill of the infusion will generally answer, and will occasionally cause vomiting.

1892: Millspaugh
A peculiar property pervades the whole natural order gentianaceae. The species when fresh are all emetic and cathartic, and when dry, tonic, stomachic in varying degrees.

1898: Felter and Lloyd: MENYANTHES – BUCKBEAN
Action, Medical Uses, and Dosage -Buckbean, when recent, and given in large doses, usually causes emesis. It is, when dried, tonic and astringent, or purgative, according to the dose. It is valuable as a tonic where digestion and blood making are impaired, and particularly when there is an associated uterine disease or irregularity, or when following the use of quinine in malarial disorders (Scudder). For this purpose, a strong tincture of the fresh leaves may be given in doses of from 1 to 10 minims. It has been given in dyspepsia, intermittent and remittent fevers, with advantage; and has been highly recommended in chronic rheumatism, hepatalgia, dropsy, worms, and some cutaneous diseases, and as a tonic in scrofula, and various cachectic affections. As a tonic, the powdered root or herb may be given in doses of from 10 to 25 grains; of the aqueous extract, 5 or 10 grains; of the infusion (Made by infusing 2 drachms of the herb or root in 4 fluid ounces of water at 212degrees F.), a fluid ounce or two; repeating the dose of either every 3 or 4 hours. Sixty grains of the powder, or 4 fluid ounces of the infusion, produce catharsis, and sometimes emesis.

1923: H.Smith: Menomini tribe
Menyanthes is tattooed into the skin as a treatment for several ills.

1955: Mockle quebec translation
The leaves are used as a bitter tonic, febrifuge, and laxative and also for rheumatism. They contain a glucoside meliatoside, and alkaloid strychnine identical with malatoside was isolated in 1910 by Bridal.