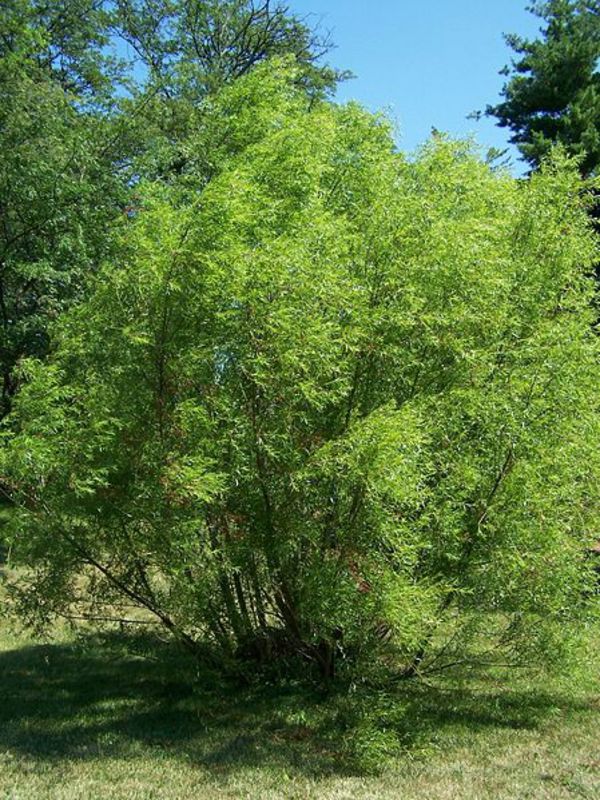 Black willow, like white willow, contains aspirin like substances which will reduce inflammation and a fever. But, in addition to this, it contains compounds that stimulate the body to heal itself. An added bonus.

Whilst this, as well as other varieties of the willow, posses feeble tonic and antiperiodic properties, there are so many better remedies of this class that it would be well to dispense with its use altogether, had it no other action. But there is a class of cases in which the slaix is a very decided antiperiodic, and if these can be distinguished, the remedy will be valuable. I believe it is in those which there is increased secretion from mucous membranes, and especially where there is the septic tendency, marked be fetic discharges, fout tongue, etc. In thyphoid disease it may be employed both as a tonic and antiseptic, using hte smaller dose named. The remedy is easily prepared, and may well replace some inferior articles that have hitherto been employed.

1898: Felter and Lloyd – SALIX NIGRA – BLACK WILLOW
Action, Medical Uses, and Dosage – The bark of black willow is recommended as a poultice in gangrene, and as an external application to foul and indolent ulcers and rhus poisoning, in which it stands unrivaled. It is made by simmering the powdered bark in cream. It has also been successfully used in various swellings of the neck. Internally, the root is a bitter tonic, effectual in intermittents. Some have highly recommended it in asthma and gout. At the present day the bark is seldom employed and the aments now furnish the preferred drug. A decoction of the black willow buds or aments, taken internally and applied locally, is useful in gangrene; and drank freely it proves a powerful anaphrodisiac, suppressing venereal desires for a long time, and is highly recommended in the treatment of spermatorrhoea. The last statement, written years ago by Prof. King, has been abundantly verified in the last few years by practitioners of all schools of medicine. The drug is not only anaphrodisiac, but by controlling genital irritability it becomes a marked sexual sedative and tonic. As Prof. Bloyer has aptly remarked, it is not a remedy for physiological losses nor is a beneficial action to be expected in cases requiring operative measures at the hands of orificial surgeon. Its field of action is in those functional wrongs of the reproductive organs due most largely to undue irritability of the parts, and thought to be less due to mental or emotional causes. However, sexual passion from any functional cause is moderated by it, and it is especially adapted to the disorders of the sexually intemperate male or female, and of the youth, subject day or night to libidinous suggestions and lascivious dreams terminating in pollutions, while for those extreme forms of sexual perversion, satyriasis, erotomania, and nymphomania, it is more nearly specific than any other agent. Not only doees salix nigra act as a check to sexual passion and misuse, but it proves a useful tonic an dsedative to many conditions following in the wake of sexual intemperance, among which may be mentioned spermatorrhoea in its varied forms, prostatitis, cystitis, and ovaritis. Specific Salix nigra is the preparation most largely used by Eclectic practitioners, and is to be preferred, for the fresh aments can not be procured at all times for the preparation of the decoction. The dose is from 10 to 60 drops, 3 or 4 times a day.

1911: Fyfe
Inflammation of the bladder, ovaries and prostate gland, an irritable condition of the genito-urinary organs of either sex, nocturnal emmisions, excessive sexual desire of either sex, spermatorrhea.

This remedy is highly recomended in almost all forms of excitement of the genital organs, and in spermatorrhea it has been found to possess most decided curative power. Salix nigra is a powerful sexual sedative, tonic, and astringent.

The tincture of the aments, or catkins, of the black willow, have increased medicinal properties over any other part of the tree. Specific Salix Nigra Aments is a unique preparation and contains the full properties of the drug.

The agent was brought to the attention of the profession through its influence in controlling sexual hyperaesthesia an dundue sexual excitement. It is a remedy for satyriasis, erotomania and nymphomania, more particularly from local irritation.

It relieves spermatorrhoea when dependent upon these or similar causs, and quiets the general nervous system. It is a remedy for ovarian congestion, ovarian neuralgia and hyperaesthesia, also for ovarian irritation in hysteria. It will exercise a direct and satisfactory influence in many cases of hysteria, overcoming the extreme excitability and nervousness, headache and the globus hystericus, and will permit quiet, restful sleep. It will serve an excellent purpose in these cases in combination with general nerve tonics and restoratives, greatly enhancing their influence.