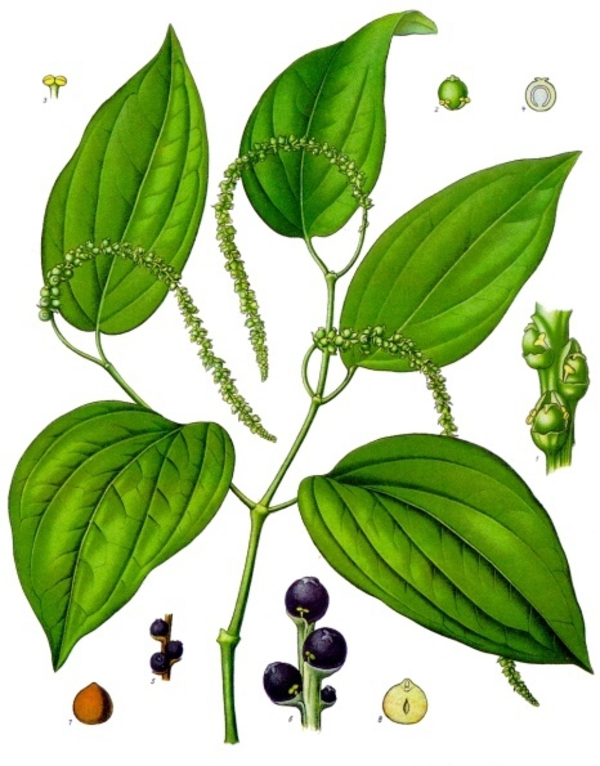 1854. John King. Materia Medica. – PIPER NIGRUM
Properties and Uses – Black pepper is a warm carminative stimulant, capable of producing general arterial excitement. Its chief medicinal use is to excit the languid stomach, and correct flatulence, and is sometimes addedto quinia in cases where the stomach is not susceptible to quinia alone. It has been recommended as a remedy in intermittents, but very often fails. Piperin is occasionallyemployed in intermittent fever, but will be found less efficient than the alcoholic extract of black pepper. Its use has also been advised in colic, diarrhea, cholera, scarlatina, chronic gonorrhea, and in solution as a wash for tinea capitis. Piperin should not be adminstered with astringents, as it is thereby rendered nearly inert. Dose of Black pepper from five to twenty grains; of piperin, from one to eight grains.

1874:Scudder
We make a tincture of Black Pepper in proportion of 3viij. to Alcohol 76degree Oj. The pepper should be finely ground and packed in the percolator, moistened with Alcohol and allowed to stand twenty-four hours, then run the remainder of the Alcohol through it. Dose, gtts. ij. to 3j.

Black Pepper is a remedy I value very highly. As a gastric stimulant it certainly has no superior, and for this purpose we use it in congestive chills, in cholera morbus. and other cases of a similar character. In atonic dyspepsia it may be associated with IIydrastis or other stomachic bitter, or sometimes with Nux Vomica or Strychnia. I have used it associated with Tincture of Macrotys in atonic amenorrhoea with advantage, and sometimes the same combination will be found beneficial in dysmenorrhoea.

It may be used with excellent results in the treatment of intermittens, preparing the way for Quinia and associated with it. In these cases it is used in full doses.

1911: LLOYD
Black pepper (Piper nigrum) is a perennial, climbing shrub native to the forests of Malabar and Travancore, whence it was introduced to other tropical countries, such as Sumatra, the Philippines , West Indies, and the Malay Peninsula . It has been used as a spice and as a stomachic remedy by the natives of the afore-named and other countries since the date of the discovery of the remedy, and probably from all time preceding. Pepper was mentioned by Theophrastus (633), who described two kinds. Dioscorides (194) and Pliny (514) both give it a place in their writings. As early as 64 A.D. it was mentioned as occurring on the Malabar Coast . The Romans at Alexandria , A.D. 176, levied on it a duty. The Arabian authors of the Middle Ages, twelfth and fourteenth centuries, described it fairly. In the European countries of the Middle Ages pepper was considered the most important of all spices, being the foundation of much of the wealth of Venice and Genoa during their greatest commercial activity. It has been used as a medium of exchange when money was scarce, and when Rome was besieged by the Goths the ransom included three thousand pounds of pepper. In fact the value placed upon pepper in the records of the past is in itself an indication of its importance to the people who used it.